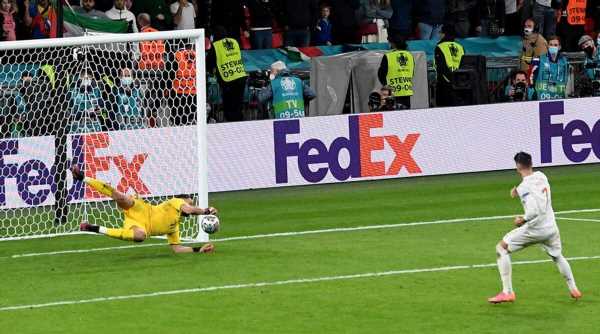 With a stunning finish by Federico Chiesa in normal time, and a deciding penalty by Jorginho, Italy edged past Spain at the end of a thrilling night in Wembley. Italy cruised into the finals of the UEFA Euro 2020 in a highly dramatic penalty shootout with 3 time European Champions Spain. This will be the fourth consecutive European Championship tournament where the two heavyweight sides have faced each other, with their most recent meeting in a Round of 16 clash at Euro 2016. With a stunning finish by Federico Chiesa in normal time, and a deciding penalty by Jorginho, Italy edged past Spain at the end of a thrilling night in Wembley.

Spain were seeing a lot of the ball during the opening minutes, and an otherwise offensive Italian side seemed to be caught off guard by Spanish agility and movements. However, a wonderful through-ball from Emerson to Barella saw Italy find their way back into the game within the opening 5 minutes, as they nearly secured an early winner. Barella took the ball around Spain’s goalkeeper Unai Simon, who had rushed way out of his line. With no one to back him up, Barella took matters into his own hands, chipping the ball towards the Spanish net. A near-perfect finish, Barella’s chipped effort pinged into the post, sending ripples of emotion across the stadium. However, Barella had just strayed offside, and any Italian goal would have anyway been ruled out.

In a beautiful counter-attack, Federico Chiesa throttled a delivery into the far right corner, sending Italy ahead 15 minutes into the second half. Donnarumma did well to set them off quickly, and Italy quickly capitalized on the ball forward. Veratti sent it to Insigne down the left, who in turn picked out Immobile sprinting towards the Spanish goal. A gallant tackle by Spain’s centre-back Aymeric Laporte helped dispossess a speeding Immobile, but the latter did well to tip the ball into Chiesa’s feet. Chiesa dinked the ball into some empty space, before curling a beauty into the back of the net. Simon helplessly watched the ball pass by him, as Chiesa’s banger put Italy 30 minutes away from a Euro final.

Look at me Spain

Alvaro Morata found his redemption with a late Spanish equalizer to twist the game once again. Having been benched at the onset of the game, Morata proved his substitution, as Spain found their way through in this dramatic semi-final. Spain had been dominating possession since the start of the game and finally managed to convert a beautiful attack forward. Morata dropped deep to get the ball from Laporte in the 80th minute, playing a skillful one-two with Dani Olmo to open up a space down the middle. As Olmo threaded the ball through, Morata slotted it into the left corner effortlessly, past the 22-year-old Italian goalkeeper Donnarumma. In a captivating celebration, Morata buried his face into a camera outside the goal line, but who wouldn’t be watching him after that lovely finish?

With more possession, more shots on target and more attacks forward, Spain seemed to be knocking onto Italy’s door during Extra Time. Wonderful efforts by Dani Olmo and Morata were certainly causing trouble for a tired Italian defence, however, new energy crept into Italy’s players halfway through the second half of Extra Time. Captain Chiellini raised a great ball over the top for Berardi, who was exuberantly pointing down to where he wanted it to land Berardi brought Chiellini’s ball down with a perfect first touch, lifting it over Simon and into the back of the net. This was the third or fourth time that Simon had rushed out of his line, and Berardi punished him with the chipped ball that was sent racing into Spain’s goal in a near breakthrough for Italy in the 110th minute. However, he was denied by the offside flag moments later to bring the score back on level terms in a dramatic evening at Wembley.

With no winner at the end of Extra Time, both sides progressed to an exciting penalty shootout: Spain’s second at Euro 2020. In a dramatic shootout, Italy prevailed by 4 goals to 2, racing towards a much-anticipated Euro Finals against either England or Denmark. Both Dani Olmo and Alvaro Morata missed their pens against Gianluigi Donnarumma for Spain- ironically enough they had been the Spanish side’s backbone throughout the duration of the match. In a final penalty for his side, Jorginho stepped up to decide the outcome. He performed his trademark hop, wrong-footing Unai Simon and sending the ball rolling towards the goalkeeper’s left and into the far corner. With a roar of ecstasy, emotion and elation, the Italian team surged onto the field knowing that they had done enough. 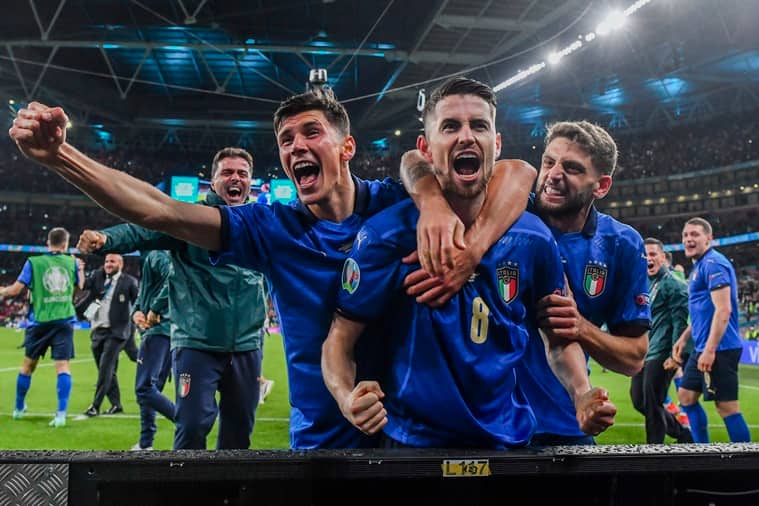 Morata’s untimely miss meant heartbreak for Spain, who had worked so hard to reach this point. Their effort had been tremendous, and Wembley had seen late drama once again. In the end, however, Italy had edged their way past the 3 time European Champions. Italy’s unbeaten streak now stands at 33 matches in all competitions, and they have reached their 10th major tournament final and 4th European Championship final. They will now face either England or Denmark back at Wembley on Sunday. Will Rome see it come home?

(Ahaan is an intern with indianexpress.com)