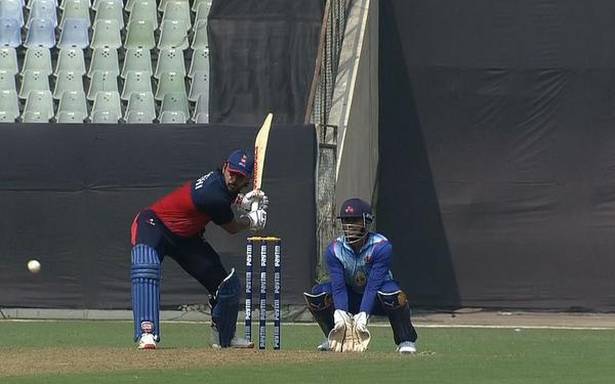 Rana and Himmat take the attack to the cleaners; Dube’s blitz goes in vain

Arch-rivalry between the opponents besides the presence of some of the prolific stars in domestic arena was a recipe tailormade for the opening Group E tie of the Syed Mushtaq Ali between Mumbai and Delhi to be a humdinger.

However, it turned out to be a lop-sided affair in favour of Delhi at the Wankhede Stadium here on Monday. An all-round performance by Shikhar Dhawan’s boys took Delhi to a facile, 76-run win.

Ever since opener Hiten Dalal went after Dhawal Kulkarni and Tushar Deshpande in the first two overs of the match until last-man Kruthik Hanagavadi perished to veteran Ishant Sharma, it was a one-way traffic.

A star-studded Mumbai batting line-up — with top six having been a part of IPL 2020 — couldn’t withstand the pressure applied by Delhi pacers to fold up for a meagre 130 with 11 balls remaining.

Had it not been for Shivam Dube’s big-hitting (63, 42b, 3×4, 5×6), Mumbai would have struggled to cross the 100-run mark. But the all-rounder, who earlier had Rana’s wrath with the ball, ensured he showcased his straight-hitting abilities.

With the trio of Ishant, Simarjeet Singh and Pradeep Sangwan reducing Mumbai to 17 for four in the fifth over, the fizz had been taken out of the game before Dube’s arrival at the crease.

Earlier in the afternoon, Dube’s medium-pace was taken to the cleaners by left-handed Rana, who tonked him for two fours and as many sixes in the 14th over.