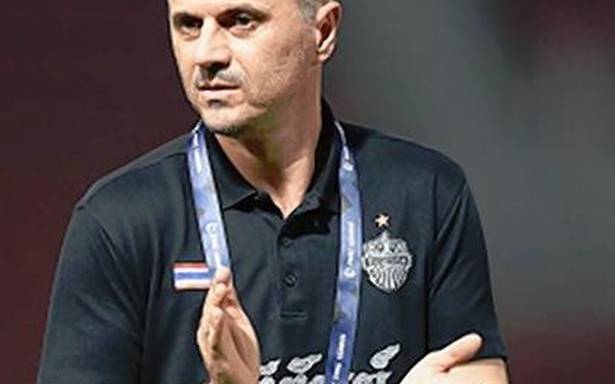 New coach Bozidar Bandovic says the team’s priority is to be in the top four, after a disappointing ISL season

Bozidar Bandovic, the new head coach of Chennaiyin FC, has his task cut out.

While the creative midfielder Rafael Crivellaro of Brazil has been retained, there are five slots remaining for the foreigners to be filled. Those who will be picked, will have to integrate with the Indian players in quick time.

The 51-year-old from Montenegro, who has wide experience and knowledge in handling top clubs in Eastern Europe and the Balkan region such as Red Star Belgrade and Olympiacos, not to mention his successful stint with Buriram United in Thailand, should be up for the huge challenge. Especially after Chennaiyin endured a poor season finishing eighth on the table.

In an interview to The Hindu, Bandovic said the team’s priority is to be in the top four. “Yes. The team had a poor season in the last edition. Of course we will now start to bring the players. They will help the team more and make a difference in the field and of course we will try to improve the team in both attack and defence and do everything to score more goals and be in a better position on the table to be in the top four,” he said.

While refusing to critically analyse the previous coach for the disastrous show, Bandovic said the 17 goals the team scored, of which few were penalties, were clearly not enough, if the team needed to win. “I looked at the games, but I cannot judge my colleagues because every coach is trying his best. The team [Chennaiyin] didn’t win even one game at home. Of the 17 goals, if I am right four or five were scored from penalties, and if you want to be in the top four, this is very little for one team. But we need to improve, especially in attacking,” he said.

He welcomed the Indian Super League increasing the number of Indian players from six to seven, but insisted it is the responsibility for the club to improve its domestic players.

“…But of course if our [India’s] young players show good performances, we will try to improve them and we will try to improve some players from the defense too. But for me, the main thing is to improve domestic players. Of course, the change [number of players] is one point but still the coaches in the team or the Academy will have to work very hard and [put] quality work to improve domestic players,” he said, while emphasising that the key for him will be to keep the ball, control the game and at the same time score as many goals.