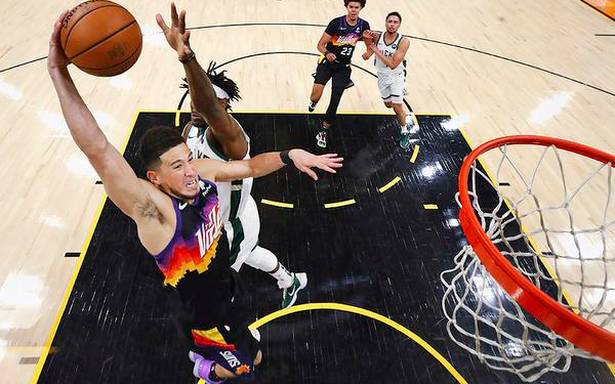 Antetokounmpo battles in vain for the Bucks

Devin Booker scored 31 points and Chris Paul added 23 on Thursday to spark Phoenix Suns to a 118-108 win and a commanding 2-0 lead over Milwaukee Bucks in the NBA Finals.

The action shifts to Milwaukee for games three and four on Sunday and Wednesday.

Giannis Antetokounmpo scored 42 points and added 12 rebounds, but the Bucks could not offer the 26-year-old Greek forward enough support.

Booker delivered his eighth 30-point game of the playoffs while Paul, in his first NBA Finals at age 36, added eight assists.

Bahamas big man Deandre Ayton had 10 points and 11 rebounds and Jae Crowder 11 points and 10 rebounds for the Suns.

Phoenix outscored Milwaukee 15-4 over the final 4:40 of the second quarter to seize a 56-45 half-time lead.

Antetokounmpo scored 20 points in the third quarter, the most by any player in an NBA Finals quarter in 25 years, but the Suns still led 88-78 entering the fourth quarter.

The Suns lost swingman Torrey Craig to a right leg injury at the end of the third quarter just a day after losing Croatian forward Dario Saric with a torn right knee ligament.

Two-time NBA Most Valuable Player Antetokounmpo, who missed two games with a hyperextended left knee before returning in the opener, scared the Bucks when he fell to the court in the second and third quarters but he rose and continued each time.