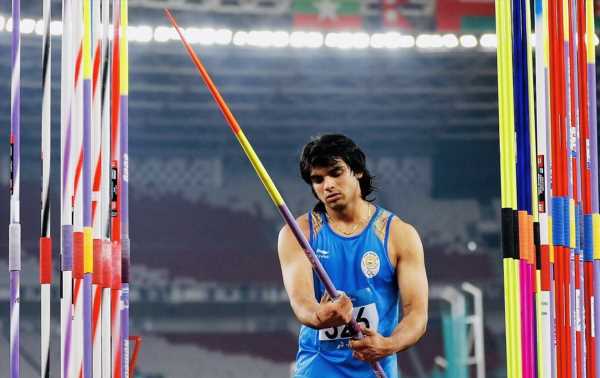 Olympic champion javelin thrower Neeraj Chopra will headline a 22-member Indian athletics team at the World Championships to be held in Eugene, USA from July 15 to 24.

Just like Bhawana, Seema gave the event a miss as she too wanted to focus on the Commonwealth Games, an event where she bagged medals in the last four editions.

“She wants to concentrate on the Commonwealth Games, where she won four medals. She feels she has better chance there and we also feel the same,” Athletics Federation of India (AFI) president Adile Sumariwala said while announcing the team.

Besides Chopra and Rohit Yadav is the other javelin thrower in the team.

The squad also includes Amoj Jacob (4x400m) but his participation is subject to fitness. In case he is not fit, Arokia Rajiv will replace him in the relay squad.

The only surprises in the squad are the inclusion of Parul and Jabir.

Jeswin Aldrin, who had already qualified for the championships, however missed the cut.

Aishwarya Mishra, who evaded from dope testing agencies last month but was allowed by AFI to compete in National Inter-State Championships, has been selected with a rider.

“She will be subject to trails in 400m and if she qualifies she will go. She will undergo electronis timing as well NADA testing,” Sumariwala said.

On what explanation Mishra gave after evading dope tests, Sumariwala said: “She went to visit her ailing grandmother and lost her phone. That was her explanation.”

Sumariwala said the team will head to Chula Vista, California for a short stint before heading to Eugene for the event.

“The team has been selected on the basis of world ranking and qualification standards laid down by the World Athletics,” he said.

“The team will leave for Chula Vista soon where it will have a short stint before World Championships.”

The contingent will for the USA in three batches with the first group scheduled to leave on Saturday, followed by the next on Monday and the the third and final by July 5.

The decision to send the team in batches was taken due to time taken for getting US visa.

Indian athletics chief coach Radhakrishnan Nair informed that 11 visas have already been granted and the next set of interviews are lined up for Friday.

Reigning youth world champion Sachin Siwach produced a scintillating performance to cruise into men’s 57kg quarterfinals of the Elorda Cup as he beat Turkmenistan’s Ykhlas Gylychjanov with a unanimous 5-0 verdict in Nur-Sultan on Thursday.

The 22-year-old pugilist put forth a commanding show against his opponent but it was end of the road for former World Championships bronze medallist Simranjit Kaur as she lost 2-3 to her Chinese opponent Xu Zichu in a gripping 60kg last-8 contest.

Two other Indian boxers, Lakshya Chahar and Harsh Lakra, also bowed out of the event, having gone down to their respective Kazakh rivals.

While Lakshya lost to Abzal Kuttybekov in the 86kg quarterfinals encounter 0-5, his compatriot Harsh also faced a similar fate, having been outclassed by Yerassyi Zhakpekov 0-5 in the 80kg preliminary round.

The finals of the tournament will be played on July 4 and the champion boxer will receive USD 700, while the silver and bronze medallists will take home USD 400 and USD 200 respectively.

Barcelona to sell 10% of TV rights to Sixth Street for 207.5m euros

Barcelona have agreed to sell a 10% stake in their LaLiga TV rights for the next 25 years to US private equity group Sixth Street for 207.5 million euros ($215.84 million) as they look to improve their financial situation, the club announced on Thursday.

“We are activating economic levers and executing on our patient, sustainable, and efficient strategy to strengthen the club’s financial footing,” Barcelona president Joan Laporta said in a statement.

The US investment firm already has ties to Barcelona’s rivals Real Madrid, after reaching a 360 million euros deal in May to develop and operate new businesses at the Santiago Bernabeu stadium for 20 years.

“Our team looks forward to a long-term partnership providing our flexible capital and deep sports sector expertise to support Barca as it continues to strengthen its organization and achieve its strategic objectives,” Alan Waxman, Co-Founder and CEO of Sixth Street, said.

Earlier this month, Barcelona approved the sale of a minority share of their licensing and merchandising division and the cession of up to 25% of their income from their LaLiga TV rights.

Laporta, who presided over one of Barca’s most successful periods between 2003 and 2010, was elected last year for a second stint with the Catalan giants after the previous board resigned due to the club’s worsening finances and other controversies.

Laporta said in August the club’s debts totalled 1.35 billion euros, 673 million of which was owed to banks.

In March, the club signed a shirt and stadium sponsorship deal with audio streaming platform Spotify (SPOT.N) in an agreement worth 280 million euros.

Hosts Norway have confirmed that they will host the Indian Davis Cup team on September 16 and 17 in their next World Group I tie, the All India Tennis Association (AITA) announced on Thursday.

The hosts have a choice playing either on Thursday-Friday or Friday-Saturday and Norway have chosen the first option.

India will face Norway for the first time in the prestigious event.

“There is a lot of hope and anticipation amongst the fans as India and Norway will face each other for the first time in the history of the Davis cup and we look forward to observe some scintillating Tennis from the Men in Blue,” the AITA said in a statement.

Chennai will host the first ever Open WTA 250 international women’s tennis championship from September 12 to 18, the Tamil Nadu government and Tamil Nadu Tennis Association (TNTA) have confirmed on Thursday.

The event to be held at the SDAT tennis stadium, Nungambakkam, will see the participation of leading women players from among the top 100 in the world.