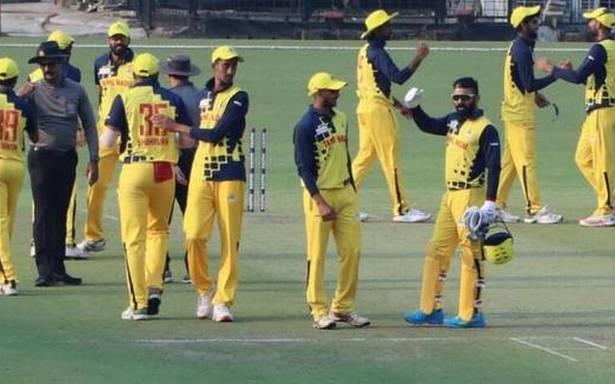 Skipper Karthik comes up with a cameo; Jharkhand batsmen fail to get going

Tamil Nadu rode on C. Hari Nishaanth’s unbeaten 92 to post a crushing 66-run win over Jharkhand in its opening match of the Syed Mushtaq Ali Trophy T20 tournament at the Eden Gardens on Sunday. Asked to bat, Tamil Nadu scored a formidable 189 for five before restricting Jharkhand to 123 for seven.

Southpaw Nishaanth (92 n.o., 63b, 8×4, 3×6), who batted confidently and executed some clean hits, forged a 72-run stand with fellow opener N. Jagadeesan to give Tamil Nadu a strong start against an attack that lacked discipline. Jagadeesan (27, 28b, 2×4, 1×6) gave good support to Nishaanth before being caught brilliantly by Rahul Shukla at long on off Anukul Roy.

Karthik, who hammered Monu Kumar for 6, 4, 6, 6 in a row in the 18th over, was run out in the last over bowled by Shukla, who dismissed two other batsmen.

Jharkhand struggled in its reply as its batsmen played some poor shots in the PowerPlay overs.

Ishan Kishan edged Sandeep Warrier to Karthik, Utkash Singh chipped Sonu Yadav to square-leg and Kumar Deobrat was caught at deep point off Warrier as Jharkhand was reduced to 47 for three in six overs.

Virat Singh (23, 24b, 2×4) tried to consolidate for six overs but could not achieve the desired result due to Tamil Nadu’s well-planned attack despite the retirement of Vijay Shankar owing to a hamstring niggle. Tamil Nadu is hoping that he will play atleast as a batsman from the next match.

Anand Singh’s unbeaten 24-ball 28 also was also in vain. Sonu also scalped Virat and Shahbaz Nadeem to finish with three for 31 on debut.