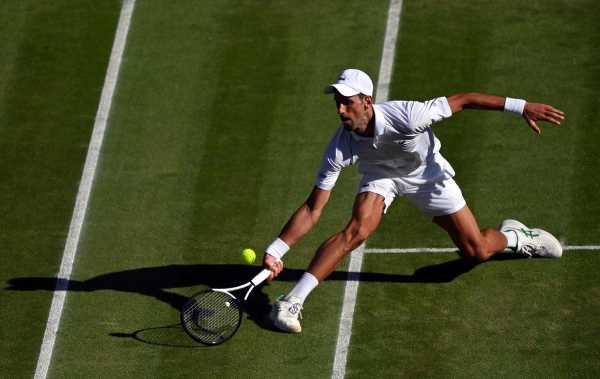 Top seed Novak Djokovic recovered from a horror start to defeat Cameron Norrie 2-6, 6-3, 6-2, 6-4 on Friday and set up a Wimbledon final against Nick Kyrgios.

Home fans were in raptures as inspired ninth seed Norrie outshone the 20-time Grand Slam champion and looked capable of a huge upset in his first major semi-final. The Englishman capitalised on a rash of errors from a tense-looking Djokovic to win five successive games and take the opening set.

Djokovic, bidding for a fourth successive Wimbledon title and seventh in all, turned the match on its head after he broke Norrie’s serve in the eighth game of the second set and there was no looking back from that point onwards.

The 35-year-old Djokovic will aim to win his 21st Grand Slam title when he takes on Kyrgios in Sunday’s final. The Australian leads their head-to-head series 2-0.

Djokovic, who has won the last three Wimbledon titles, also created a new record as he made it to his 32nd Grand Slam final, going past Roger Federer (31). He has been unbeaten at Wimbledon since retiring with an elbow injury against Tomas Berdych in the 2017 quarter-finals.

The Serb, who won three Grand Slams last year, missed out on the Australian Open in January after being deported because he was not vaccinated against COVID-19.

He lost in the French Open quarter-finals to eventual champion Rafael Nadal, who won the first two Grand Slams to take his tally to 22.

A look at Djokovic’s run to the final: 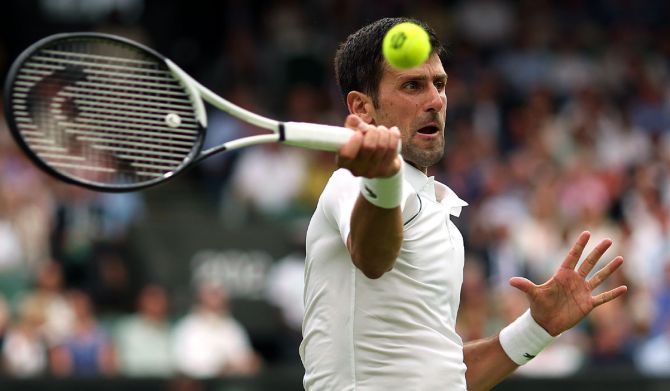 Djokovic looked a bit rusty in his first round match against 81st-ranked Korean Kwon Soon-woo.

The defending champion looked out of sorts at times against Kwon, but managed to recover after losing the second set to register a hard-earned 6-4, 3-6, 6-3, 6-4 victory.

Djokovic had not played a grasscourt warm-up tournament and he admitted that did not help his game against a tough opponent, 11 years his junior.

It was Djokovic’s 80th Wimbledon win and he became the only man to have won 80 matches at all four Grand Slam tournaments. Djokovic was back to his dominant best in his second round match against Australian Thanasi Kokkinakis as he cruised to an easy 6-1, 6-4, 6-2 win.

He broke his opponent’s delivery early in each of the three sets for a total of five break of serves during the contest.

Djokovic faced a lone break point on his own serve and closed out the victory in two hours on his second match point. Djokovic continued to grow stronger as he thrashed fellow Serb Miomir Kecmanovic 6-0, 6-3, 6-4 in straight sets in the third round match.

Such was Djokovic’s domination that he breezed through the opening set in just 24 minutes, while Kecmanovic finally got on the scoreboard after 35 minutes when he won a long service game.

Djokovic was streets ahead of his 22-year-old rival as he reached the last 16 at Wimbledon for the 14th time. 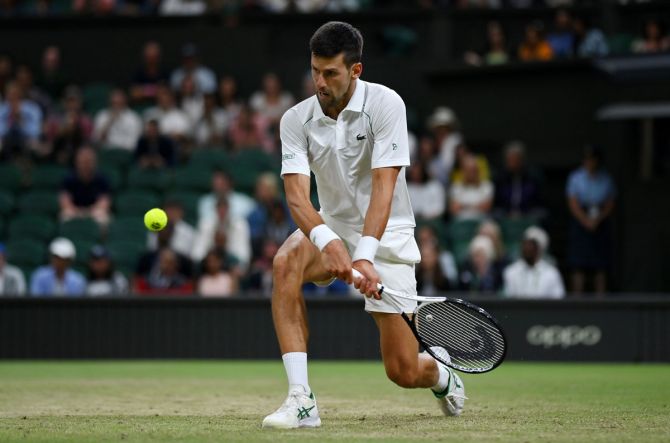 Djokovic raised his level to put an end to Dutch wildcard Tim van Rijthoven’s fairytale run during a battling 6-2, 4-6, 6-1, 6-2 victory in the fourth round.

Djokovic cruised through the first set before van Rijthoven, who had triumphed at the ATP 250 grasscourt event in ‘s-Hertogenbosch, The Netherlands, defeating world number one Daniil Medvedev in the final, made a strong comeback by clinching the second set to level scores.

Djokovic brought all his experience into play as he broke his opponent’s serve twice in the third set to completely shut out the momentum the Dutchman had gained. He got a break early in the fourth set, while a second break in the seventh game settled the issue in the champion’s favour. Djokovic staged one of the greatest comebacks in the history of Wimbledon as he battled back from two sets down to beat Jannik Sinner in the quarter-finals.

After being shocked in the first two sets, Djokovic turned things around in spectacular fashion after he left Centre Court for a toilet break. The Serb made it to his 43rd Grand Slam semi-final and 11th at Wimbledon.

In only one year out of the last 13 has Djokovic failed to reach at least one Grand Slam final — in 2017 which was also the last time he lost a match at Wimbledon.