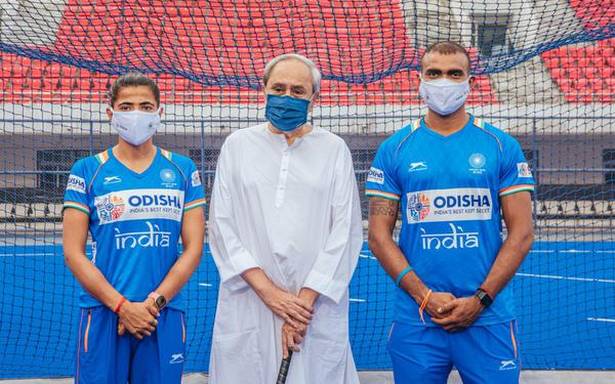 It is remarkable that our teams have worked hard in spite of all challenges and emerged victorious, says Odisha Chief Minister

Each player was awarded ₹10 lakh and each support staff ₹5 lakh by the State government.

“You made us all so proud with your spirited fight at Tokyo. These are deeply emotional moments for India to witness the revival of Indian Hockey. For nearly four decades, the hockey fans have been yearning to see India grab a medal at the Olympics,” Mr. Patnaik said felicitating the hockey teams here.

“The way the entire country was glued to the screens to watch the teams’ matches, it is quite evident there is something more to hockey than just sports. In the background of the pandemic, it is remarkable that our teams have worked so hard in spite of all challenges and emerged victorious,” he said.

Stating that in these crisis times, the teams have brought smiles on the faces of crores of Indians, Mr. Patnaik said, “We, in Odisha, are elated that our partnership with Hockey India has led to this great achievement for the country. I believe Odisha and hockey are destined to become synonymous. Odisha will support the Indian Hockey teams for 10 more years.”

Mr. Patnaik gave away 13 different awards. While Harmanpreet Singh won the player with maximum number of goals scored, PR Sreejesh was given for saving most number of goals. Each team presented a framed jersey autographed by the players to the CM. The government also awarded ₹50 lakh to Hockey India.

“I would like to take this opportunity to thank Mr. Patnaik and the people of Odisha for showing their love and affection for the sport. With your continued support, Indian Hockey will look to build on the achievements from the Tokyo Olympics, and continue this steady rise to take it back to the elite level where it belongs,” said Narinder Dhruv Batra, president, Indian Olympic Association.