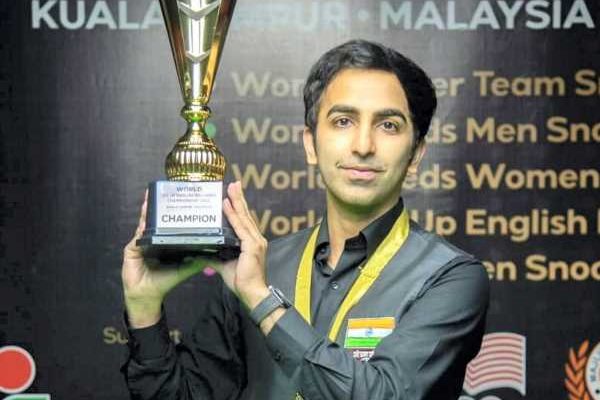 Pankaj Advani won his 25th World crown on Saturday after a resounding 4-0 victory over fellow-Indian Sourav Kothari in the 150-up billiards final at the IBSF World Championships in Kuala Lumpur on Saturday.

India’s ace cueist amused the vast crowd, manipulating his cue like a magician’s wand. He made it plain from the first frame that the championship belonged to him.

While his opponent, who is still vying for his first IBSF World Championship, had yet to score a point in the 150-up format, he secured the first frame with a 149 break.

Advani cruised through the best-of-seven frames contest to achieve billiards’ National-Asian-World golden trifecta in the same calendar year for a record fifth time.

After Kothari failed to take advantage of the few opportunities that his deserving opponent offered him, Advani won the second frame for a 2-0 lead after a break off 77.

He then cranked up the heat while playing some superb pool to wow Malaysian fans at the High End Snooker Club in the third.

Kothari again started off with some good shots but missed one after scoring 12 points. From thereon Advani crafted an unfinished break of 153, the highest in the tournament, to lead 3-0.

Magnificent breaks of 86 and an unfinished 60 in the fourth frame were the icing on the cake as he sealed the contest, demonstrating once more why he is the man to beat in the 3-ball game.

Kothari earned 72 points in sum, while Advani, who won his last World crown 12 months ago in Qatar at the IBSF 6-Red Snooker World Cup, accumulated almost 600 to successfully defend his title for the sixth consecutive year.

“It’s a dream to defend a world title for five times in a row. Truly pleased with how I’ve played and won every billiards event I participated in this year. Feel honored to bring to my country yet another gold medal at a world level,” said Advani later.

The tournament, last held in 2019 due to the COVID-19 pandemic, was revived after a three-year gap.