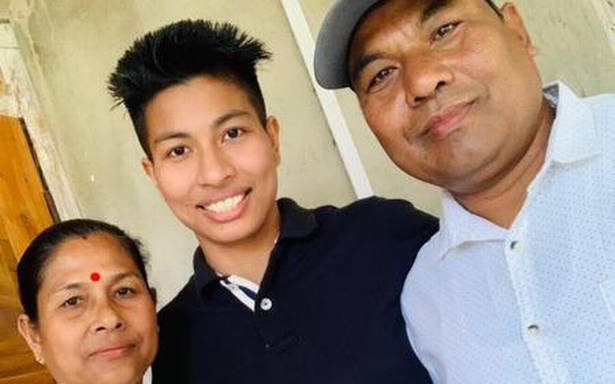 Following the exciting Olympic medal win of weightlifter Mirabai Chanu at the Tokyo 2020 Olympics, another win followed closely on its heels. Boxer Lovlina Borgohain assured India of first boxing medal at Tokyo Olympics on July 30. She is set to take on world champion Busenaz Surmeneli of Turkey in the semi-finals on August 4.

But until then, get to know the 23-year-old boxing champ.

Lovlina is the youngest of three siblings (she has two elder sisters). Hailing from a village called Bormukhia located the town of Barpathar in the Golaghat district, Assam, she belongs to a family who rely on paddy farming.

Over the phone, speaking with MetroPlus, her father Tiken Borgohain, bubbling with excitement, says he is elated at her win and confident she will bag an Olympic gold for the country next time. Lovlina first learnt mixed martial arts muay thai and then later graduated to boxing once she was enrolled by Sports Authority of India.

Lovlina’s success was celebrated with a lot of fervour in their small village. An ardent fan of Manipur’s Mary Kom, Lovlina has always been a sports lover since childhood. Even though there is no facility for sports training in the town of Barpathar, seeing her enthusiasm for sports her father decided to enroll the then-12-year-old Lovlina for muay thai classes started by a local group of boys.

Speaking at a recent virtual press conference, she stated, “I started thinking that no matter the situation, I would give my best. I want to win even if I am fighting with a broken hand.”