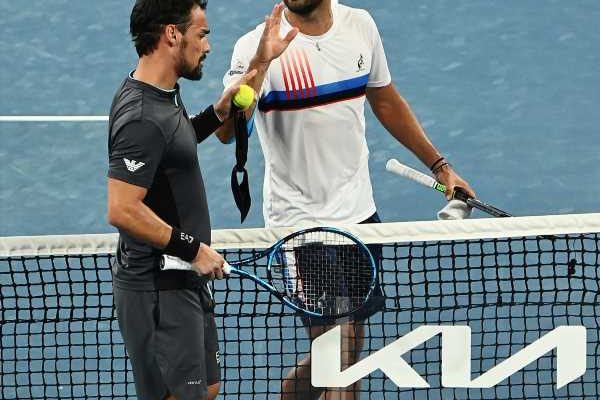 Fabio Fognini and Salvatore Caruso had to be separated by the court supervisor after the first all-Italian Australian Open men’s singles match of the open era ended in uproar on Thursday.

The traditional handshake at the net quickly degenerated into a heated argument when Fognini suggested Caruso was lucky on some points in the match, an observation the Sicilian objected to.

The expletive-filled exchange, punctuated by plenty of gesticulation, continued by the side of the court until the official stood between the two players.

“We are good friends,” a smiling Fognini later told reporters. “You know me… things that happen on court, stay on court. I have nothing to say about that question anymore.

“I am really happy because I think I was not playing my best tennis today,” he added when asked again about the incident.

“So I had more chances than him in the fifth, but that’s the sport. I was lucky, too … these kind of things sometimes happen on court.” “You understand my words or not?” he said. “Can you please change question, please? Next question, thank you.” Caruso was equally unforthcoming when asked to discuss the post-match ruckus.

“We just had some different opinions. I think this is something that should stay in the locker room, and I will speak with him because we are friends,” he said.

Fognini, who came from 1-5 down to win the final tiebreak 14-12, saving a match point along the way, was also involved in controversy during a match at Melbourne Park last year. On that occasion, he ripped his shirt off in protest at a perceived injustice and was docked a point for refusing to play during an ill-tempered fourth round loss to Tennys Sandgren that the American described as a “war”.

The 33-year-old claycourt specialist will face Australian number one Alex de Minaur in the third round.

“Really tough,” said Fognini. “At the moment he’s favourite, because he hasn’t lost a set.

“Now I’m 33, nearly 34, and I wish my body still recovers really quickly because Alex I think is one of the faster guys in the circuit.”