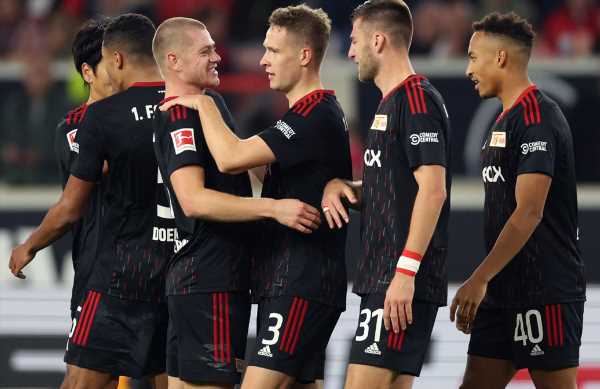 Union Berlin edge Stuttgart to stay top of the league 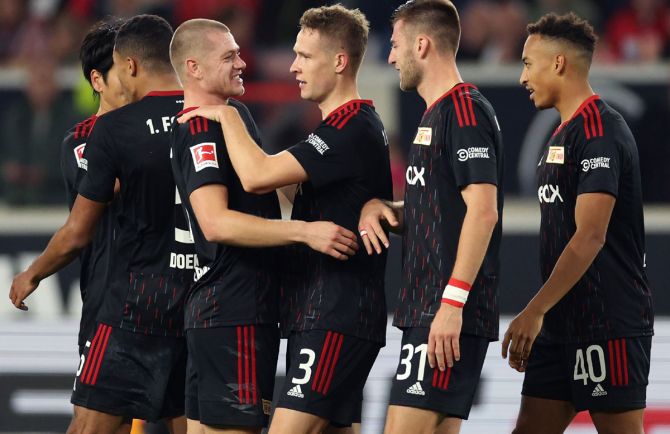 Union Berlin’s Paul Jaeckel scored a 76th-minute winner to give his team a 1-0 victory at VfB Stuttgart on Sunday and send them two points clear at the top of the Bundesliga.

Jaeckel was left with too much space in the box, allowing him to head in off the post and lift surprise leaders Union to 20 points, two ahead of second-placed Freiburg.

Stuttgart finished the game with 10 men after Serhou Guirassy was dismissed in the 82nd minute.

For much of the game the hosts, however, had not looked like the only team in the league without a win this season. They had the better chances in the first half, with Guirassy’s glancing header in the 34th minute being their best.

Union remained composed at the back and patient, grabbing their chance through Jaeckel although Stuttgart did hit the post through Kostantinos Mavropanos three minutes later.

Freiburg needed a 78th-minute goal from Kevin Schade to rescue a 2-2 draw at Hertha Berlin earlier on Sunday. 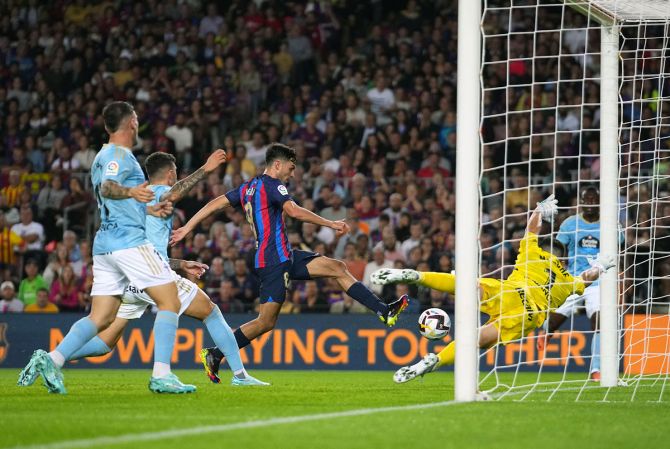 Pedri’s first-half goal gave Barcelona a 1-0 win over Celta Vigo at Camp Nou on Sunday to move them back to the top of LaLiga but they had to battle for the victory against determined opponents.

Barca are level on 22 points with Real Madrid after eight games but have a better goal difference before the pair face each other next Sunday in El Clasico at the Santiago Bernabeu.

It was the seventh consecutive league win for Barcelona, who started well with Gavi and Raphinha running the channels and creating several scoring opportunities.

Celta’s Argentine goalkeeper Agustin Marchesin made an incredible save in the 10th minute with the tip of his left hand to keep out a brilliant long-range shot from Raphinha.

However, he was beaten seven minutes later by Pedri’s close-range strike from a rebound after capitalising on an error by defender Unai Nunez who tried to clear Gavi’s cross.

Teenage sensation Pedri was again on hand to find the net, having scored eight goals from 16 shots on target in LaLiga, scoring with each of his last four.

Celta looked much better after the break, taking control of the ball and creating several chances, but were denied by goalkeeper Marc-Andre ter Stegen.

The German international extended his clean-sheet streak in LaLiga to six games, while he has not conceded a goal in seven of Barca’s eight league games this season.

Celta made a late push but Ter Stegen made three brilliant safes to deny Celta an equaliser – two of them late on.

First he stopped a one-on-one strike from Iago Aspas with his right foot and then, in added time, deflected a close-range header by Carles Perez moments before Gonzalo Paciencia smashed a thundering strike off the right post.

“We need to be self-critical today, we have to be much better than we were today,” Barca coach Xavi Hernandez told DAZN.

“Our team played well in the first 30 minutes, could have scored more goals, but they were better than us in the second half.

“But soccer is like this, it’s hard to win and important to win games like this, when you are not at your best and the rivals give you a hard time.”

After Celta’s good start to the first part of the season, they have lost three of their last four league games and are 11th on 10 points, four above the relegation zone.

“I think we deserved more than just one point, we deserved to win,” Celta captain Aspas told DAZN. “We had a great second half, had five or six great scoring chances, but the usual is to lose here.”

Napoli back on top as Atalanta and Udinese share the points 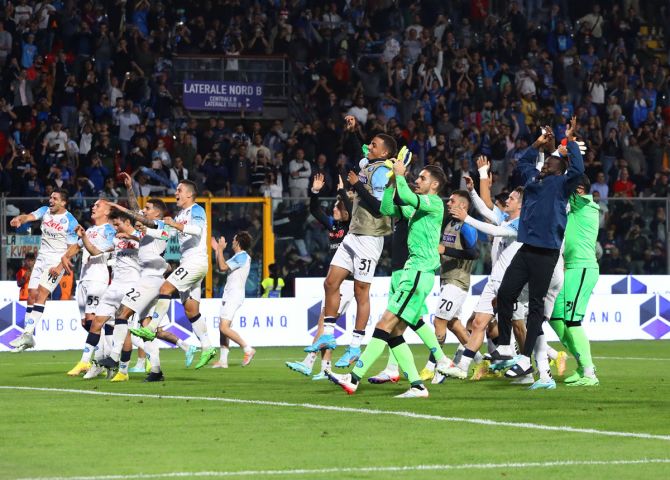 Napoli snatched the Serie A lead back with a 4-1 win at Cremonese on Sunday, helped by two goals in added time, while Udinese and Atalanta drew 2-2 in a tight contest.

Napoli opened the scoring with a penalty in the 26th minute after Khvicha Kvaratskhelia was clumsily tackled by Matteo Bianchetti. Striker Matteo Politano despatched the spot kick.

Cremonese equalised two minutes into the second half when Cyriel Dessers pounced on a through ball and hammered it home.

Giovanni Simeone put Napoli back in front when he headed a cross from Mario Rui into the net after 76 minutes.

Atalanta had briefly topped the standings after their draw at Udinese but Napoli put themselves in first place again with a two-point cushion thanks to their resounding win in Cremona.

A late goal by defender Nehuen Perez helped Udinese recover from two goals down to earn a home draw as they continued their best ever start to a top-flight campaign.

Udinese, who finished 12th last season, have six wins, two draws and one loss so far this season and are unbeaten in their last eight games.

Jose Mourinho’s AS Roma won 2-1 at home to Lecce, with the visitors reduced to 10 men when midfielder Morten Hjulmand was sent off after 23 minutes.

An early Chris Smalling goal and a Paulo Dybala strike after halftime secured the victory for Roma, while Gabriel Strefezza scored for Lecce. Roma are now in fifth place with 19 points.

Napoli have 23 points after seven wins and two draws in their nine matches, two points ahead of Atalanta, with Udinese third on 20 points.

Monza won their third game in a row with a 2-0 success at home to Spezia thanks to goals from Carlos Augusto and Pablo Mari. They are now 12th in the table with 10 points. 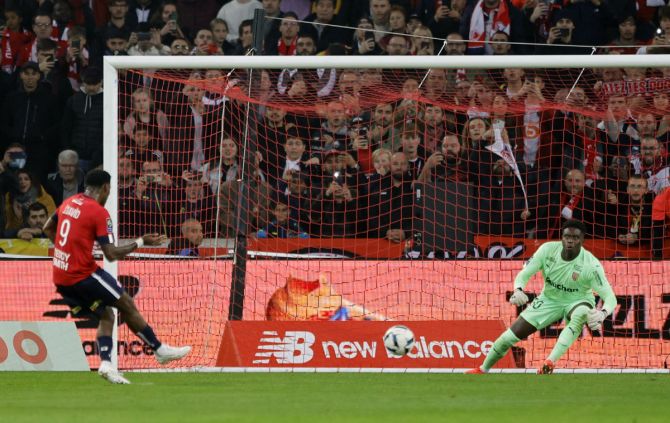 RC Lens’s unbeaten run in Ligue 1 came to an end when Jonathan David’s penalty earned Lille a 1-0 home victory in the northern derby on Sunday.

Lens, who missed a penalty through Florian Sotoca and had not been beaten in their previous 17 league games, were overwhelmed physically by a bold Lille side.

The result left Lens in fourth place on 21 points from 10 games, five behind leaders Paris St Germain and four adrift of second-placed Lorient, who leapfrogged Olympique de Marseille after a 2-1 win at Stade Brestois earlier on Sunday.

Lille’s win helped them to move up to seventh on 16 points.

In a high-octane first half in which each team picked up three yellow cards, Lens had the first opportunity to open the scoring in the 15th minute, but Florian had his penalty blocked by Lucas Chevallier after Jose Fonte had brought down Deiver Machado.

David was more precise for Lille when he converted a 44th-minute penalty after Massadio Haidara had fouled Benjamin Andre.

Lille pushed for a second goal after the interval and came close through Adam Ounas, David and Andre Gomes, but it was Lens who had the best chance when Alexis Claude-Maurice’s 20-metre strike was tipped away by Chevallier.

It was Lens’s first Ligue 1 defeat since April 10.

Earlier, Lorient’s surprise run continued when they snatched a win at Stade Brestois courtesy of a Terem Moffi double.

Moffi cancelled out Romain del Castillo’s opener before the break with a splendid shot into the top corner before sealing the win with his eighth goal of the season when he latched on to a cross from Yoann Cathline.

Monaco beat Montpellier 2-0 away to climb up to fifth, one point behind Lens.