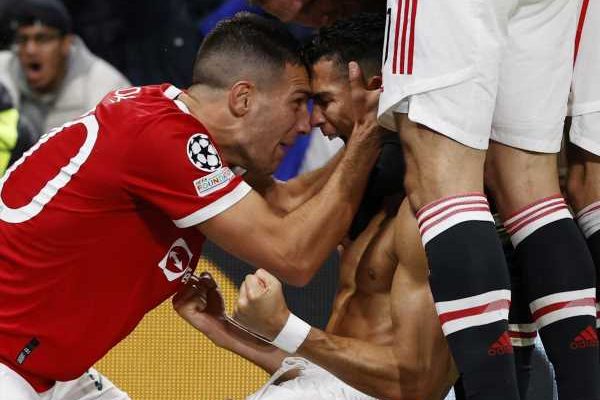 A summary of Wednesday night’s action in the UEFA Champions League.

Cristiano Ronaldo grabbed a stoppage-time winner as Manchester United came from behind to secure a fortunate 2-1 Champions League Group F win over Villarreal, at Old Trafford, on Wednesday.

On the night he set the new record for the most appearances in the competition, the 36-year-old Portuguese delivered the killer blow to save his manager Ole Gunnar Solskjaer from another disappointing result and the inevitable inquests.

“When you’ve got Cristiano on the pitch, you’ve always got a chance,” the Norwegian said.

“Seriously, he’s so so good in front of goal. Its a massive result for the team and for the spirit of the team,” he added.

United had fallen a goal behind to Paco Alcacer’s 53rd- minute opener before drawing level with a brilliant volley from Alex Telles but failing to make the most of the momentum shift. After three defeats in their last four games, including the loss in Bern to Young Boys in the group opener, United could ill-afford another slip-up.

But for long stretches of the game an upset looked very much on the cards and had the visitors been sharper in front of goal, the contest might have been over by the break.

With Harry Maguire, Aaron Wan Bissaka and Luke Shaw all missing from the defence, United were easily opened up in the first half with Diogo Dalot enduring a particularly difficult 45 minutes.

Arnaut Danjuma tormented the United right back and tested David De Gea twice after cutting in from the left flank. Alcacer had a header from a Danjuma cross tipped over by the United keeper and, after a slip-up by Raphael Varane, found himself one-on-one with De Gea but fired wide.

After squandering those chances, however, Villarreal took a deserved lead when a counter-attack was finished off by Alcacer who turned in Danjuma’s low cross.

United struck back seven minutes later with a cleverly worked free kick as Bruno Fernandes chipped the ball deep to Telles on the left and the Brazilian fired home a perfect volley.

Edinson Cavani missed a good chance to grab a winner for United, heading wide at the back post, and the hosts survived a goalmouth scramble with Boulaye Dia going close for Villarreal.

Then, deep into stoppage time, substitute Fred crossed from the left and Ronaldo headed to Jesse Lingard who fed the ball back for the Portuguese to drive home.

Old Trafford erupted in relief and joy and Ronaldo picked up a yellow card for ripping off his shirt and throwing it into the crowd in his 178th Champions League match.

Atalanta top the group standings with four points, one ahead of Young Boys and United.

Villarreal are bottom with one point after a cruel end to the match. Juventus forward Federico Chiesa’s strike 10 seconds into the second half earned his side a hard-fought 1-0 win over holders Chelsea in their Champions League Group H clash.

After a subdued first half with few chances, Chiesa exploded into life after the restart, rifling in what proved to be the winner on the end of Federico Bernardeschi’s clever pass.

Chelsea continued to dominate possession but struggled to create a killer opening, while Bernardeschi wasted a glorious opportunity to make it 2-0 after Chiesa again breached the Blues’ backline.

The one big Chelsea opportunity came and went late on as Romelu Lukaku, who had a very quiet evening, blazed over after turning Juve captain Leonardo Bonucci inside out.

The home side held on to continue a fine start to their Champions League campaign under returning coach Massimiliano Allegri as they sit top on six points from two games, while Chelsea stay second on three points.

Juventus inflicted a first group-stage loss on Chelsea since September 2019.

Chelsea had started on the front foot, with Lukaku drilling straight at goalkeeper Wojciech Szczesny early on.

But that was as good as it got for the holders in the opening period, as Juve dominated and created a host of promising chances.

Firstly, Bernardeschi should have done much better when finding himself through on goal, with Chiesa offering him an outlet he ignored to his right, before Italy forward Chiesa himself arrowed a strike just wide.

Adrien Rabiot then narrowly missed the target as Juventus kept coming forward, getting the home fans in a reduced 50% capacity off their seats.

Chelsea coach Thomas Tuchel yet again made a halftime change, bringing on Ben Chilwell for Marcos Alonso, but before the substitute could even draw breath, Bernardeschi had slipped Chiesa in to lift the roof off the Juventus Stadium.

Tuchel threw on more bodies in attacking positions in search of an equaliser but, other than a late flurry of openings, Chelsea again lacked a cutting edge in the final third, losing 1-0 for the second game in a row in all competitions. The Pole, whose failure to net in the Bundesliga on Saturday ended a 19-game scoring run in all competitions, opened his account in the 12th minute with a penalty to make it a record 18 straight Champions League games in which he has scored.

Lewandowski added another goal in the 27th, latching onto a superb through ball from Thomas Mueller to beat keeper George Buschan for his 77th Champions League goal, leaving him third on the all-time scorers list.

Serge Gnabry, Leroy Sane and Eric Maxim Choupo-Moting netted in the second half to complete the rout.

Bayern have six points from two games ahead of Benfica on four following their 3-0 home win over Barcelona, while Dynamo are third on one point.

The Bavarians were dominant throughout, hardly giving the Ukrainians any space, as their fans enjoyed a goal feast as they returned to the Allianz Arena for a European game for the first time since 2019.

Dynamo, who have won two of their last 14 games in the competition, had a rare chance when Carlos de Pena forced a superb save from Manuel Neuer after a quick counter-attack in the 41st minute.

But that was their best opportunity of the game as Bayern stepped back on the gas midway through the second half to score three more times.

Gnabry thundered the ball home to make it 3-0 in the 68th before Sane, who had hit the woodwork earlier, drilled in their fourth six minutes later. Substitute Choupo-Moting completed the scoring with a header three minutes from time. Barcelona were humbled 3-0 by Benfica to pile the pressure on coach Ronald Koeman, with the Spanish club’s Champions League hopes hanging by a thread.

Barca are bottom of Group E with no points from two games, six behind leaders Bayern Munich and four adrift of Benfica.

Things started badly for the Catalans as Darwin Nunez opened the scoring after three minutes with a neat near-post finish.

Lucas Verissima made a last-ditch block to deny Luuk de Jong from close range as Barca looked to get back into the game, but they were second best throughout.

Their plight was summed up on the half hour when Koeman substituted Gerard Pique, who had been booked and lucky to avoid a second yellow, for 17-year-old midfielder Gavi.

Nunez almost added a second five minutes after the break when he hit the post from distance after beating Marc-Andre ter Stegen to a through ball.

With 21 minutes left Jorge Jesus’s side got their reward as Rafa Silva fired in from close range after Ter Stegen had denied Joao Mario.

Nunez doubled his tally from the penalty spot on 79 minutes after VAR spotted a handball by Sergino Dest.

Eric Garcia was sent off for a second yellow card three minutes from time as a bad night turned to worse for Barca, and the defender will miss the must-win home game against Dynamo Kyiv next month. Zenit St Petersburg notched the first win of their Champions League Group H campaign with a 4-0 victory over Swedish side Malmo FF, who had Anel Ahmedhodzic sent off as they slumped to their second defeat in a row in the competition.

The Russian side, who lost 1-0 at holders Chelsea in their opening game, took the lead in the ninth minute when Brazilians Douglas Santos and Claudinho combined for the latter to fire home a superb first-time finish.

Malmo captain Andreas Christiansen had a glorious chance to net Malmo’s first goal in the group stage 10 minutes later, but he blazed his effort over the bar with the goal at his mercy.

The Swedes found themselves two down four minutes after the break as Yaroslav Rakitskyy twisted and turned before crossing for Daler Kuzyaev to send a looping header beyond the dive of Johan Dahlin and into the net.

Any slim hopes Malmo had of making a comeback were dashed four minutes later when centre-back Ahmedhodzic was shown a straight red card for denying a goalscoring opportunity with a deliberate handball.

Zenit’s Aleksei Sutormin scored in the 80th and Wendel added another in stoppage time to make it two consecutive defeats for bottom side Malmo.

Rakitic snatches point for Sevilla with disputed penalty at Wolfsburg Sevilla’s Ivan Rakitic scored a hotly-disputed penalty three minutes from time as they rescued a 1-1 draw at Wolfsburg in their Champions League Group G showdown.

Winger Renato Steffen gave the home side the lead early in the second period but Sevilla, who conceded three penalties in their last Champions League game, were handed a lifeline when Josuha Guilavogui was adjudged to have fouled Erik Lamela in the area, which led to a second yellow card for the midfielder.

Replays suggested Lamela had committed the foul, but when Bulgarian referee Georgi Kabakov was asked to review the incident by the Video Assistant Referee, he pointed to the spot.

Sevilla and Wolfsburg are second and third respectively in the group with two points each after two matches behind leaders RB Salzburg, who have four. Lille have one point.

Wolfsburg took the lead three minutes after the break when Sevilla failed to clear a cross and a fortunate ricochet off a defender fell kindly for Steffen to score from close range.

Wout Weghorst later came close when one-on-one with visiting goalkeeper Bono but saw his shot well saved on a frustrating night for Wolfsburg compounded by the late Rakitic penalty.