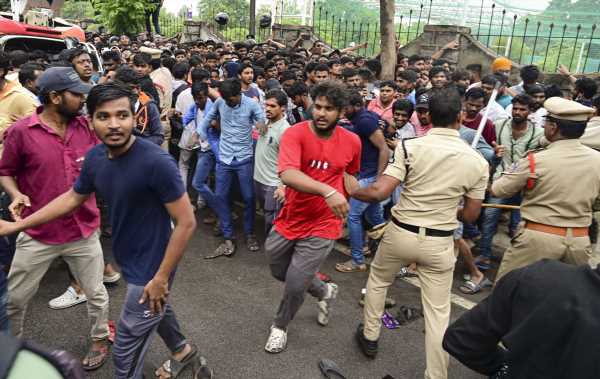 Hyderabad police registered a case against the Hyderabad Cricket Association on Friday after a stampede broke out at the Hyderabad cricket stadium on Thursday.

A total of three cases have been booked against the Hyderabad Cricket Association in relation to the unfortunate incident.

Cases have been booked under sections 420, 337 and 21/76 of the city police act after four people were injured following a stampede at the Gymkhana grounds because of huge rush by cricket fans to purchase tickets for the third T20I match between India and Australia.

The third T20I stadium between India and Australia will take place at the Rajiv Gandhi International Stadium in Hyderabad on Sunday, September 25.

A huge crowd had come to the Gymkhana grounds to purchase tickets. A large queue of fans was captured waiting to get their hands on tickets.

But the situation soon went out of control and a stampede broke out, with excited fans coming in huge numbers and causing law and order issues. Police lathi-charged to disperse the massive crowd and restore control.