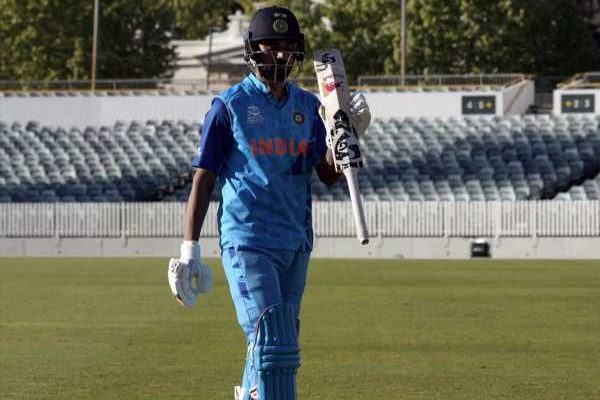 KL Rahul hit a quickfire half-century and Ravichandran Ashwin took three wickets in an over but India suffered a 36-run defeat against Western Australia in their second practice match ahead of the T20 World Cup, at the WACA stadium in Perth on Thursday.

India were in experimentation mode as Rahul captained the team in place of Rohit, who surprisingly opted not to bat in India’s run chase, while regulars including Virat Kohli, Suryakumar Yadav and Yuzvendra Chahal were given a rest.

D’Arcy Short and Nick Hobson hit half-centuries to steer Western Australia to 168/8 in their 20 overs after they had elected to bat. In reply, Rahul was the only India batter to go past 20, as he smashed a brilliant 74 from 55 balls, hitting nine fours and two sixes.

Rishabh Pant opening the batting in place of Rohit perished after scoring just nine, while the middle order also failed with Deepak Hooda (9) and Hardik Pandya (17) and Dinesh Karthik (10) all falling cheaply.

India finished on a disappointing 132/8 in their 20 overs.

Pant suffered another failure as he holed out in the deep trying to hit pacer Jason Behrendorff over the leg side. Hooda, batting at No 3, fell to fast bowler Lance Morris as India were reduced to 39/2 in the eight over.

Hardik fell to left-arm spinner Hamish McKenzie as the visitors slipped to 58/3 in the 10th over and Morris made it worse as he bagged the wicket of Axar Patel in the 13th over.

Rahul raced to his fifty from 43 balls but didn’t get any support from the other end. Karthik also got out to spinner McKenzie as India were left reeling on 108/5 in the 17th over.

Earlier, Hobson stroked a quickfire 64 off 41 balls, while Short slammed 52 from 38 balls putting on 110 runs for the second wicket to rally the hosts after the early wicket of Josh Philippe, who was dismissed by Arshdeep Singh for eight.

However, after Hobson fell to Harshal Patel, India were able to restrict Western Australia with regular wickets in the final few overs. Short was run out by Harshal before Ashwin dismissed Cameron Bancroft (6), Ashton Turner (2) and Samuel Fanning in the 17th over to finish with excellent figures of 3/32.

The lower order couldn’t do much as Hamish McKenzie (3) was run out by Rahul, while Andrew Tye (6) became Harshal’s second victim.