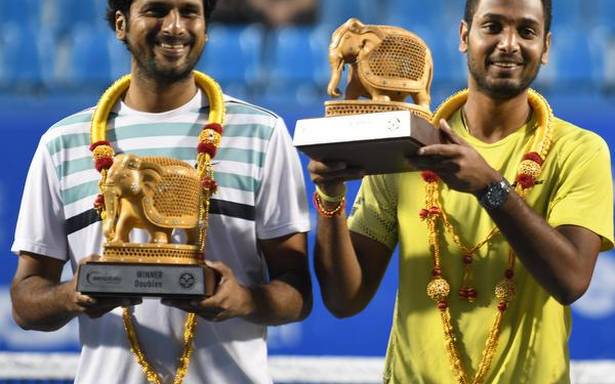 Ramkumar Ramanathan continued his dream run in doubles, winning his third title of the year, as he and Saketh Myneni beat the French pair of Hugo Grenier and Alexandre Muller 6-3, 6-2 to clinch the Bengaluru Open ATP Challenger on Saturday.

The duo was ruthless on the day, especially on serve, winning 36 of 41 service points. A solitary break in the first set (fourth game) and two breaks in the second set (first and seventh games) were enough as the Indian pair coasted to victory.

Their French opponents appeared short of energy, with Muller especially looking tired. It was his second match of the day, having played his singles semifinal earlier in the afternoon.

The trophy was Ramkumar’s seventh in doubles on the Challenger Tour – second in Bengaluru – and Myneni’s ninth.

“It feels great to win on home soil,” said Myneni. “Ram has had a fantastic year so far and is playing with great confidence. Hopefully that reflects in his singles as well, going forward.”

“We are glad. We executed our plans well from the beginning, did our fundamentals right and played some aggressive tennis, which both of us like to do,” the 34-year-old added.

Sunday’s singles final will be between Chinese Taipei’s Chun-hsin Tseng and Croatian qualifier Borna Gojo. Chun-hsin was down a break in the first set and his opponent Enzo Couacaud even had two set points at 5-3. But the 20-year-old clawed his way back impressively to reach his third Challenger singles final on the bounce.