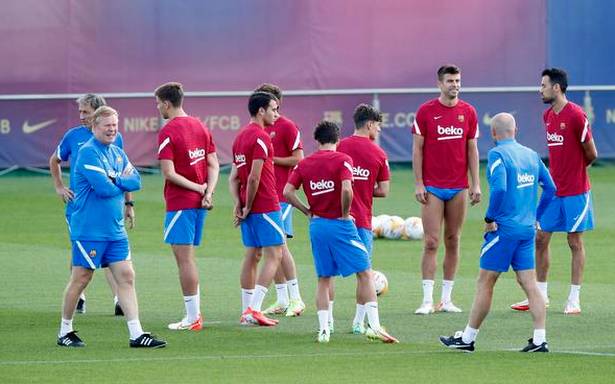 Xavi Hernandez, Martinez and Pirlo are on the shortlist of Barcelona president

A revival is surely beyond Ronald Koeman even if Barcelona beat Atletico Madrid on Saturday but Antoine Griezmann will hope his own resurgence is just beginning.

Only the schedule is on Koeman’s side now, with the international break next week dictating that it makes more sense for Barca to change coach after their trip to the Wanda Metropolitano than before.

The 3-0 defeat by Benfica in the Champions League on Wednesday left Koeman’s team at the bottom of Group E and struggling to make the knock-out stages.

In La Liga, they sit sixth, although their position could be more easily rectified, given they are only five points adrift of leaders Real Madrid, with a game in hand.

Few, though, appear ready to give Koeman time to make amends for what has been a miserable start to the season, full of disappointing results and worse performances.

Koeman’s performances in public have fuelled the fire as well, a feud with club president Joan Laporta in recent weeks adding to the sense that his time at Camp Nou is running out.

A two-match suspension means Koeman will not be on the touchline on Saturday for what could be his final game in charge and his best hope of being retained is perhaps that Laporta fails to land a successor.

In the summer, Laporta told Koeman he would need two weeks to find a possible replacement but none were found, or at least convinced that this Barcelona is now a club worth joining.

Xavi Hernandez, Roberto Martinez and Andrea Pirlo are the names at the top of Laporta’s shortlist.

Whether Barca’s players are motivated or deflated by a potentially imminent change remains to be seen, although it has been notable this week how little backing Koeman has received.

Gerard Pique, Sergio Busquets and Frenkie de Jong were all given the opportunity to support the Dutchman but only De Jong came close, answering "no" when asked if sacking Koeman would change anything.

Koeman’s regular appeals for observers to be "realistic" have gone increasingly unheard, despite attempts to highlight the club’s financial meltdown, a string of summer sales and several injuries as reasons for reducing expectations.

Griezmann was among those let go, his two-year boomerang from Atletico to Barcelona and back to Atletico one of the clearest demonstrations of the reckless, short-term thinking at Camp Nou.

Atleti have been the chief beneficiaries financially, given they stand to pocket 80 million euros from the to-and-fro, having already won La Liga while the Frenchman was away.

But Griezmann has struggled to readapt to his old team, a dreadful run of form finally alleviated by a superb goal against AC Milan in the Champions League on Wednesday, which instigated a 2-1 win.

After Griezmann failed to muster a goal, assist or even a shot on target in his first five matches, Diego Simeone appeared to be running out of patience too, with Angel Correa starting alongside Suarez at the San Siro.

Griezmann came on in the 61st minute and scored in the 83rd, volleying in brilliantly from Renan Lodi’s cross, and the hope will be that with confidence he can find a role now in the line-up of the reigning champions.

Atletico are only two points ahead of Barcelona after a slip-up of their own last week against Alaves, who had lost all five of their previous matches.

Real Madrid are the early frontrunners but there are doubts there too, following Wednesday’s shock 2-1 loss at home to Sheriff Tiraspol in the Champions League.

Madrid play away at Espanyol on Sunday while Real Sociedad in second will look to continue their excellent start with a win at Getafe. Sevilla, in third, travel to Granada, in 17th.