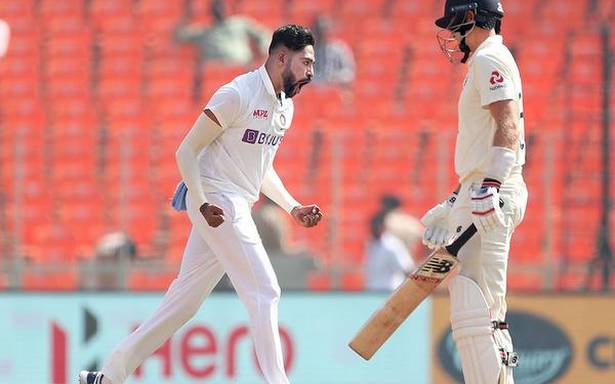 He may have been playing only his fifth Test, but with the rich experience at domestic and India-A level over the last five years, Mohammed Siraj has appeared a mature pacer ever since his debut in Australia.

This maturity — and no little skill — was amply evident on Thursday in the manner in which he dismissed Joe Root and Jonny Bairstow.

Siraj enjoyed both wickets, especially that of the England captain. “I thought it was a nice set-up,” he said. “I had bowled away-going deliveries to Root in my previous over. When I was coming for the fresh over, I decided to try an incoming ball. It came out as I planned and I was able to hit Root’s pads. It gave me a lot of joy.”

Soon after lunch, Siraj broke the partnership between Ben Stokes and Bairstow by getting a quick delivery to move in a little bit and rap the latter’s pads.

“I had seen some of his videos and gathered that he is troubled by incoming balls. So when I got a chance to bowl to him after the interval, I decided to try that. The ball tailed in as planned and I had the wicket,” he said.

Besides earning the prized scalps, Siraj was also involved in a verbal duel with Stokes after a well-directed bouncer in the morning session.

The bouncer was followed by Stokes retorting with pleasantries, but Siraj tried his best to downplay the exchange:

“Stokes exchanged a few words with me but it happens on the ground. I told [Virat] Kohli and he took care of the issue.”