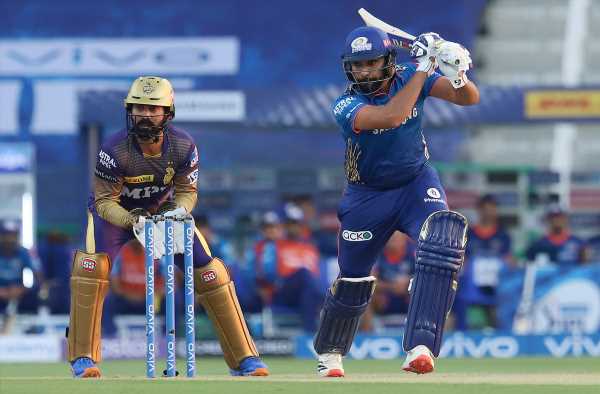 Rohit Sharma became the first batter to register more than 1000 runs against a franchise in the Indian Premier League on Thursday.

The Mumbai Indians skipper has now scored over 1000 runs against Kolkata Knight Riders. He achieved the feat during the ongoing game between the two franchises at the Sheikh Zayed Stadium, in Abu Dhabi.

Rohit hit the 1000 runs mark in the third over of Mumbai Indians’ innings, which was bowled by spinner Varun Chakravarthy. He went on to score 33 off 30 balls before being dismissed by Sunil Narine.

The right-handed batter sat out of Mumbai’s game against Chennai Super Kings on Sunday, but returned to action, opening the innings against KKR.

The Eoin Morgan-led Kolkata Knight Riders won the toss and opted to field against Mumbai Indians. Rohit’s inclusion was the only change in Mumbai’s line-up.

“Feeling good. Looking forward to the game. Just one change – Anmol misses out. Not a lot, to be honest. Certain basics of cricket that was missed, we need to do right. We have spoken about it and, hopefully, we can execute,” said Rohit after the toss, when asked about his inclusion.

Mumbai Indians lost their opening game in this second phase of the tournament to Chennai Super Kings, while KKR got the better of Royal Challengers Bangalore.