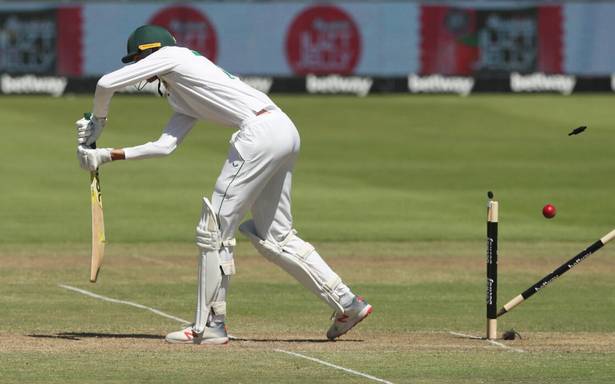 Keegan Petersen, who scored 72 off 166 balls, was the top scorer for the home side.

Jasprit Bumrah rediscovered his mojo, Keegan Petersen conjured an innings of sublime beauty and the South African seamers hit back hard on an engrossing second day at Newlands.

At stumps, India dismissing the Proteas for 210 and gaining a first innings lead of 13, was 57 for two, both its openers back in the hut on Wednesday in the third Freedom Test.

Kagiso Rabada, his line immaculate, moved one away from Mayank Agarwal and Dean Elgar held on to a flying ball in the cordon.

And K.L. Rahul, who did not get his foot to the ball’s pitch, was lured by left-armer Marco Jansen into a fatal drive to a delivery shaping away; he was well caught by Aiden Markram in the cordon.

The decider promises to be an edge of the seat affair.

Bumrah, bowling with speed and bounce from an off-stump line, moved the ball both ways and made effective use of the angles – he used the crease extremely well – to scalp five.

And Petersen batted with footwork, balance and composure for a sublime 72 on a surface that constantly tested the batsmen.

The pitch became decidedly quicker on day two. And the sun beating down would have impacted the cracks.

In the morning, Markram fell in the day’s second delivery; shouldering arms to a Bumrah ball that nipped back.

Mohammed Shami could have dismissed Petersen on four, when he took one away, but Rahul, at third slip, put down a low chance.

Nightwatchman Keshav Maharaj, whose back-footed punch off Shami sped to the cover boundary, performed the role given to him, batting 45 balls for 25 valuable runs.

Umesh Yadav brought one back to take out Maharaj’s middle stump.

Umesh was bowling to a lovely rhythm. He can be dangerous since he can threaten both the inside and the outside edge at a telling pace.

For South Africa, Petersen and Rassie van der Dussen dug in. The more you see of Petersen, the more you are impressed.

He is short in stature but has supple wrists and can find the gaps with precision. And the compact batsman gets into good positions for both defence and offence.

He essayed several shots, the cover-drive, the square-drive, the cut, the reverse sweep, and the flick but one stroke stood out – he went deep into his crease, got on top of the bounce, and punched Umesh to the cover-point fence.

van der Dussen, resolute in defence, added 67 runs for the fourth wicket with Petersen, before falling to a lovely, late away going delivery from Umesh.

Temba Bavuma played his shots. He flicked Umesh and cut when Shardul Thakur gave him room.

Bavuma had the rub of the green too. He went for a cut off Shardul, edged and the low catch was put down by Pujara at first slip.

Shami ended Bavuma’s breezy stay with a delivery that held its line close to the off-stump. Kohli held a fine catch low at second slip.

Soon, Shami, his seam position brilliant, moved one away from wicket-keeper batter Kyle Verreynne, who nicked to Pant.

Bumrah ended Petersen’s threatening tenure, with a length delivery of bounce just outside off.

Some useful blows from Rabada and Duanne Olivier ensured the first innings was almost a dead heat.

Importantly for India, the bite was back in Bumrah’s bowling.