On Monday, as the 17-year-old Chaudhary broke his own world record score of 246.0, a score which he had posted at the ISSF World Cup in Delhi earlier this year to earn the Olympic quota. 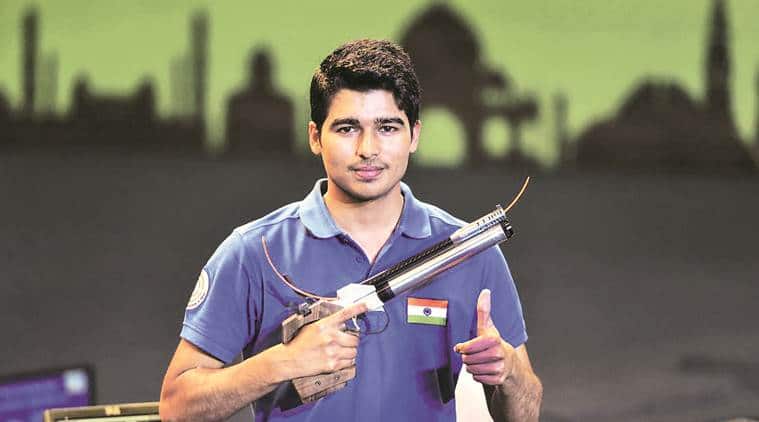 On Monday morning, as the scoring system during the 10m Air Pistol event at the ISSF World Cup suffered a glitch, it was a nervous time for Saurabh Chaudhary’s coach Amit Sheoran at his academy at Binauli, Baghpat. Some time later, the coach received a message from one of the shooters in Munich about Chaudhary qualifying for the final in second spot with a score of 586. On Monday, as the 17-year-old Chaudhary broke his own world record score of 246.0, a score which he had posted at the ISSF World Cup in Delhi earlier this year to earn the Olympic quota, with a score of 246.3 in the final to claim his second goal medal in ISSF World Cups this year, coach Sheoran would reflect on how far his ward has come in a short time.

“He is now a big player. And Saurabh will always benefit from getting experience. He took his time in the final and we saw that in the first 5-10 shots. But once he got in the rhythm, it was like repeating the same, which he has done in the past one year,” Sheoran said.

“Before joining the national camp, he had shot a score of 250.2 in a simulated final in the academy here in village and the way he handles the pressure of the final makes him the shooter to beat. He needed 10.4 to break his own world record and he shot 10.6 on the last shot. To do that in such a field, which had the presence of former Olympic champion and world medallists, will help Saurabh a lot.” A different challenge before Munich

While the Asian Games champion and Youth Olympic Games champion had secured India’s first Olympic quota in the event with his world record score in the final in Delhi early this year, Chaudhary competed in the MQS category at the ISSF World Cup in Beijing last month.

In Munich, the youngster was down with fever two days ago. “In Beijing, Saurabh had faced some problems regarding finding the right kind of food. Three days after he posted that 250.2 total in practice, he had to be hospitalised in Meerut for a day. Competing in World Cup is something, which he thinks brings out the best in him and he did not want to miss going to Munich,” says Sheoran.

On Monday, Chaudhary started the qualification with a first series of 96 but the 17-year-old recovered well in the next two series posting score of 98 and 99.

In the final too, Chaudhary made a slow start with a first shot of 9.4 but two scores of more than 10.5 in the first series saw him in second spot behind Chernousov.

The next five-shot series too saw him scoring 10.7 twice which meant that his below-10 scores on the other three shots were compensated for and he took the lead in the final, which he maintained till the end of the elimination rounds.

As compared to 2008 Olympic champion and Rio Olympics bronze medallist Wei Pang of China, who finished third with 220.7, and Chernousov, who finished with 243.8 to claim the silver, Chaudhary had six scores of 10.5 or more in the elimination rounds with Wei posting such score only twice and Chernousov four times.

“Saurabh takes his time in the final and it was the same today. He recovered well after the opening shot of 9.4 in the final and his strength was that he shot at a normal pace. With the four minutes and 10-second limit in the first two series, he did not rush to the shots neither took too much time, which Chernousov and Wei were doing. He has won every final he has reached in the last one year and it makes him mentally stronger,” shared the coach.