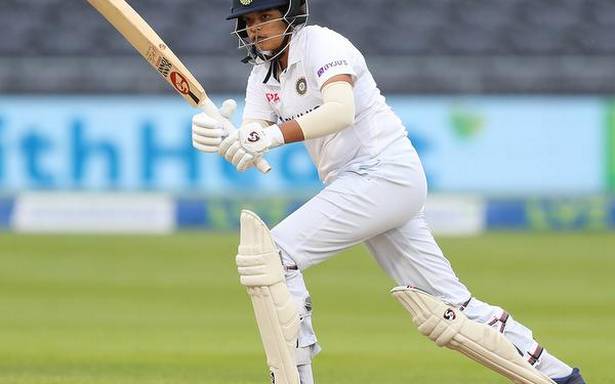 India follows on after being bowled out for 231 in the first innings; Ecclestone picks up four wickets.

The Indian women’s cricket team was 83 for one at tea after being forced to follow-on by England women on the third day of the one-off Test here on Friday.

Deepti Sharma (18 batting) was the other unbeaten batter at the crease.

Earlier, resuming at overnight score of 187 for five, India was all out for 231 in its first innings, 165 runs short of England’s first innings score of 396.

For India, all-rounder Deepti Sharma (29 not out) was the only lower-middle order batter to put up some fight as the others were all dismissed cheaply.

From 167 for no loss, India lost eight wickets for 30 runs with left-arm spinner Sophie Ecclestone getting four for 88.

The Indian batters struggled against the England spin duo of Sophie Ecclestone and Heather Knight (2/7) for most part before pacers Katherine Brunt and Anya Shrubsole took the last two wickets.

India scored its first runs of the day after 20 balls and by then had lost two wickets including the crucial one of Harmanpreet Kaur. The vice-captain was out after an England review in the second over of the day without adding anything to her overnight score of four. She was ruled leg before off Ecclestone.

Tanya Bhatia fell two overs later without disturbing the scorers after facing six balls. She too was dismissed by Ecclestone, who then dismissed Sneh Rana (2) with a turning delivery to reduce India to 197/8.

England took the new ball after 80 overs and the Indian first innings ended 1.2 overs after that with the dismissal of Pooja Vastrakar (12) and Jhulan Goswami.