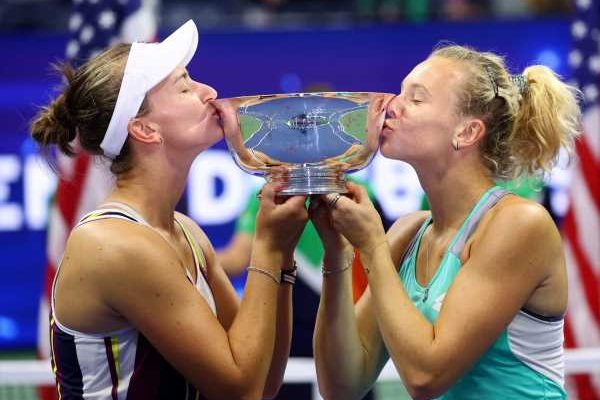 The dominant Czech duo of Katerina Siniakova and Barbora Krejcikova rallied to beat Caty McNally and Taylor Townsend 3-6, 7-5, 6-1 in the US Open final on Sunday and collect their third Grand Slam doubles title of the year and sixth overall.

The Americans led by a set and 4-1 before the Tokyo Olympics gold medallists stormed back to complete their career “Golden Slam” with their maiden triumph in New York.

“We calmed down and said okay, it’s not going to be this time,” Siniakova said of their conversation when they were trailing in the second set.

“I think it helped us and we showed better tennis after that. We were just trying to keep fighting and play every point. I’m so surprised and very happy that we did it.”

In addition to the trophy, the pair, who began playing together as juniors, collected a cheque for $688,000.

“I really appreciate that we are still playing together and it is going so well,” Siniakova said.

The pair are undefeated in the Grand Slam doubles tournaments they competed in this year. They missed the French Open when Krejcikova caught COVID-19.

“I don’t know how this is happening,” Krejcikova said.

“I found the whole season really difficult and especially this match. It was really hard for us and I think the level was high from both sides… it’s amazing that we won another slam.”

McNally and Townsend, playing in a major together for the first time, were disappointed they were unable to close out the match but said it will serve as motivation going forward.

“This one hurts,” said Townsend.

“But this isn’t the last time I’m going to be out here. I’m confident of that. I’ve put in the work, I’ve earned my way to be here, and I think everyone sees that.

“I’m going to continue to put my head down and grind and this is going to motivate me to go even harder, so watch out for 2023.”

McNally, who was also a doubles finalist at Flushing Meadows last year, praised her partner.

“Taylor, I have so much respect for you for the day-in and day-out grind that I’ve been seeing you put in,” she said to Townsend.

“You’re a great person. Thank you for this journey and hopefully we can do it again.”