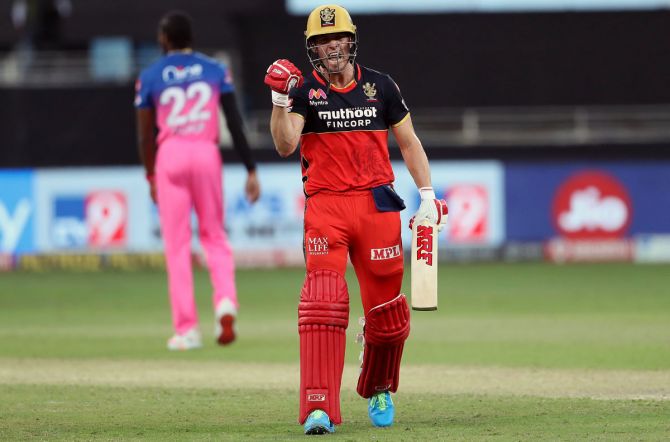 When A B de Villiers is in full flow, no target is beyond him.

Rajasthan Royals discovered it the hard way when de Villiers came up with an incredible exhibition of strokeplay in the death overs to take Royal Challengers Bangalore to a seven wicket victory from a difficult position.

After posting 177/6, Rajasthan Royals put in a disciplined effort to keep RCB’s batsmen in check.

The normally aggressive Devdutt Padikkal struggled to find his range as he hit just two boundaries in his 37-ball knock in which he scored 35.

Captain Virat Kohli was also not at his fluent best, though he made a brisk 43 from 32 balls as the duo put on 79 runs for the second wicket.

RCB had made the mistake of holding back de Villiers in the previous game which cost them victory and they ensured there was no repeat of that error as the South African walked in at No 4.

With 76 need from 41 balls at an asking rate of 11, de Villiers barely had time to get his eye in while he also had to guide the young Gurkeerat Singh Mann at the other end.

A couple of overs passed off without a boundary before de Villiers broke the shackles as he pulled Jofra Archer for a thumping huge six over square leg to literally make a statement.

There was no looking back from that point onwards as Jaydev Unadkat was sliced for a six over the cover in the next over by the right-hander to keep RCB in check with the asking rate.

But the Royals were still the favourites after the 18th over with RCB needing to score 35 from two overs for victory.

All that was needed were a couple of good deliveries to clinch the contest, but with de Villiers out in the middle you could not rule out RCB yet.

He launched a stunning assault on the hapless Unadkat in the 19th over to virtually steal the game from Royals’ grasp.

Unadkat went for the slower ball that landed on length and de Villiers’ big heave saw the ball disappear over the midwicket fence for a six to start the over in the right earnest.

The pacer went for another slower ball, this time pitched a bit fuller, which de Villiers dispatched straight down the ground for another six over long-on.

Unadkat seemed clueless against de Villiers’s brutal strokeplay and ended up trying another slower short ball which was pulled over square leg to make it a hat-trick of sixes, leaving Royals Captain Steve Smith shaking his head in disbelief.

Gurkeerat joined in the party with a four over the off-side off the fifth ball, as Unadkat went for 25 runs in the penultimate over.

RCB had the momentum with 10 needed from the final over and even Jofra Archer was unable to stop their charge.

Fittingly, de Villiers ended the match in grand style with a huge six off Archer over midwicket to give RCB a superb victory, with two balls to spare.

A few days ago de Villiers had floored Kolkata Knight Riders with his 33-ball 73 blitzkrieg and he was RCB’s hero with the bat yet again!

No wonder an awestruck Kohli remarked at the end. ‘In my eyes he’s the most impactful player in the IPL!’