Sunrisers Hyderabad were sitting pretty at the break, as their bowlers restricted Rajasthan Royals to 154/6 after they had elected to bowl first, at the Dubai International Cricket Stadium, on Thursday, October 22.

But they ran into a fired-up Jofra Archer, who came up with a lethal first spell with the new ball, to bring the Royals back into the contest.

Archer struck with the big wicket of David Warner in the very first over as the Sunrisers captain was caught at second slip by Ben Stokes.

Archer then rocked Sunrisers with another big scalp, that of the dangerous Jonny Bairstow, who was sent packing by a beauty.

An express delivery clocked 149 kmph came in sharply, went through the gap between bat and pad and crashed into the stumps as Bairstow was bowled for 10, with Sunrisers reeling on 16/2 after three overs.

The experienced Manish Pandey, the first Indian to hit a century in the IPL in the 2009 edition, showed he meant business right from the start.

He went on the counter-attack right from the start as he attempted to revive Sunrisers after the early dismissal of their openers.

He got going with a couple of boundaries through the covers off young pacer Kartik Tyagi and then stuck into Stokes at the other end.

A full delivery from the Englishman was deposited over the square leg fence for a six and, two balls later, he pulled a short ball over midwicket for another maximum.

He ensured that the Sunrisers made most of the Powerplay and went after Tyagi again in his next over. The Sunrisers No 3 played an aggressive shot back over the bowler’s head for a four even though he did not get hold of it totally.

But the next shot came bang off the middle as Pandey sent it flying over mid-wicket for a six and lofted the last ball of the over straight down the ground over the long-on fence for another six.

Pandey slammed 39 from 19 balls as he helped Sunrisers bounce back, as 42 runs came in three overs, to take the score to 58/2 in six overs.

His Karnataka state mate Shreyas Gopal also came under attack as he was pulled for a six over midwicket as the right-hander raced to his fifty from just 28 balls.

Te right-hander’s blazing start helped Vijay Shankar take his time to get his eye in as he managed just 10 from 18 balls at the other end. But Sunrisers were sitting pretty at the halfway mark, having reached 79/2 in 10 overs.

Shankar also joined the party as he hit Gopal for back to back fours over the cover region in the 11th over, while Pandey kept going from the other end as he lofted Rahul Tewatia for a straight six in the 13th over.

He ensured that the match didn’t drag on till the end as he hit Tyagi and Stokes for sixes in successive overs before Shankar ended it with a four off Tyagi, in the 19th over.

It was the Pandey show all the way as he smashed his way to an entertaining 83 not out from 47 balls, with Shankar played the supporting role to perfection with 52 from 51 balls, as Sunrisers registered a convincing eight wicket win. 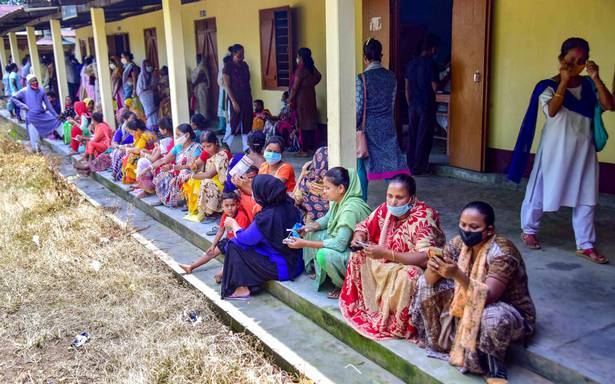