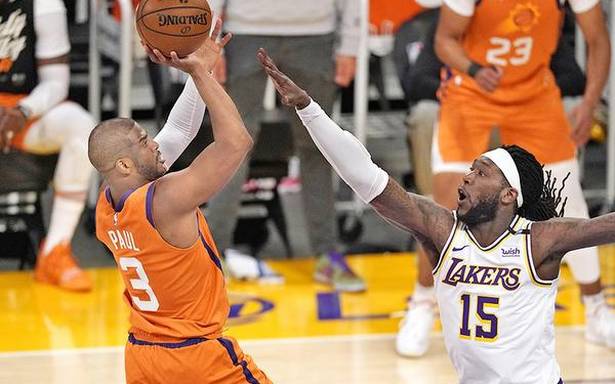 Paul and Crowder prove a thorn in the side for Lakers.

Chris Paul overcame an injured shoulder and Jae Crowder busted out of a playoff slump as Phoenix Suns took a 100-92 victory over Los Angeles Lakers, who lost Anthony Davis to another injury.

Paul had 18 points and nine assists, while Crowder delivered 17 points as half a dozen players finished in double figures for the Suns, who clawed their way level at 2-2 in the Western Conference playoff series against the reigning NBA champion.

Paul had to plead with the coaching staff to get into the game, but the move paid off as he had his best game of the first-round series after injuring his shoulder in game one.

Crowder also had his best game so far, his 17 points the same number he scored in games two and three combined.

LeBron James scored a team-high 25 points and had 12 rebounds for the Lakers, who had to play half the game without eight-time NBA All-Star Davis.

Trae Young scored 27 points to lead Atlanta Hawks to a 113-96 victory over visiting New York on Sunday, pushing the Knicks to the brink of elimination in the Eastern Conference.

John Collins added 22 points, while Italy’s Danilo Gallinari scored 21 off the bench and Clint Capela added 10 points and 15 rebounds for the Hawks.

Durant had 42 and Irving scored 39 as the Nets seized control in the second quarter to lead the series 3-1.