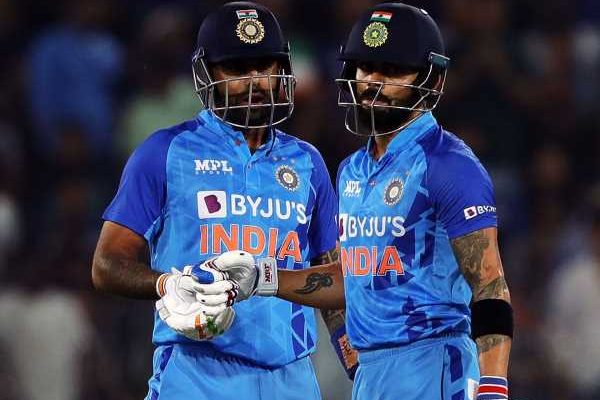 The Virat Kohli-Suryakumar Yadav combine is proving to be lethal for opposition bowlers.

The duo have been in good form in the last few months and have been involved in some memorable match-winning partnerships in T20 Internationals.

The Netherlands bowlers were at the receiving end at the Sydney Cricket Ground on Thursday as Kohli and Suryakumar slammed half-centuries to power India to a huge total after they had struggled at the start.

Kohli and Suryakumar seem to enjoy batting with each other, with the latter terming their partnership as ‘SurVIR’ on social media while reacting to his partner’s post on social media.

It was a batting treat for Indian cricket fans as SurVIR went on the rampage in the middle overs.

While Suryakumar started off aggressively in his trademark fashion, Kohli, who was batting with caution till that point, cut loose as they set about on the task to bring India’s innings back on track.

India were 84/2 in 12 overs, after which Kohli and Suryakumar put on 95 runs from seven overs, scoring at nearly 13 per over to douse any hopes the Dutch might have had to keep the Indians under a below-par total.

While Suryakumar nearly breached every corner of the ground with his dazzling strokeplay including the scoop, the inside out lofted shot, the straight drive among others, Kohli hit a few crisp drives through the covers and lofted shots down the ground.

Kohli was batting on 19 from 21 balls when Suryakumar joined him in the 13th over. And the Mumbaikar’s attacking approach seemed to have brushed off on Kohli, who started to accelerate from that point onwards.

After the game, Kohli best described the secret behind their successful partnership, saying Suryakumar just wants his assured presence at the other end.

‘He says he will take his chances and he just wants me to be there with him. I play a different role when I am batting with him, and I enjoying it because it works beautifully well for the team.’