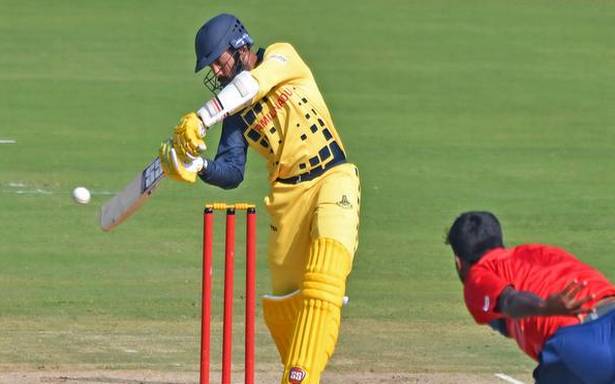 Former has heavy-hitters, latter has punched above its weight

Tamil Nadu has been the form team in white-ball cricket over the last two years under the captaincy of Dinesh Karthik.

On Sunday, it will be a third straight limited-over final appearance for the side when it plays Baroda for the Syed Mushtaq Ali Trophy at the Motera Stadium in Ahmedabad. But TN has unfinished business in recent title clashes — it lost the finals of the 50-over Vijay Hazare Trophy and T20 Mushtaq Ali Trophy last season to Karnataka.

Unbeaten in this edition, much like its opponent Baroda, TN has the resources to go all the way.

Openers N. Jagadeesan and C. Hari Nishanth have given the side starts, setting up wins during the league phase. Spinners R. Sai Kishore, M. Ashwin and B. Aparajith have delivered with the ball. In the knockouts, even when put under pressure, TN found players to step up and deliver.

For Baroda, stand-in skipper Kedar Devdhar has led from the front, scoring more than 300 runs. He has been supported by Vishnu Solanki and Smit Patel.

Tamil Nadu coach D. Vasu said, “If we play to our potential like we have done, we should be in a good position. But at the same time, Baroda, without its big names, is playing well as a team and we can’t take them lightly.”