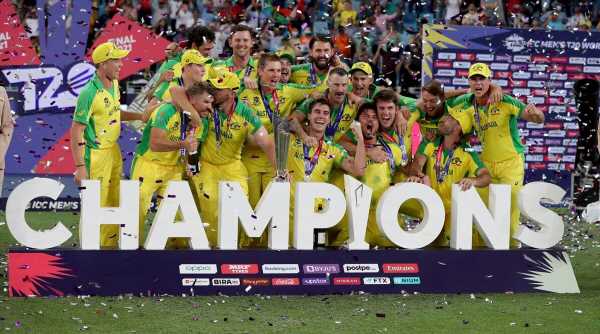 Mitchell Marsh had both the pedigree and performance to be a match-winner. Being the son of Geoff Marsh and baby brother of Shaun had its pitfalls, but also perks. He got a longer rope. You thought twice before dropping Marsh. Having led Australia to the under-19 World Cup title in 2010, he had proved that the apple hadn’t tumbled away too far from the tree. As expected he graduated to the senior team in 2011. That’s when his growth stopped. Injuries did play a role but Mitchell couldn’t cement his place in the side. The old joke about him being the “third best” batsman in his family was repeated so often that it lost its sting. For more than a decade, the Aussies waited for him to turn into at least Shaun, if not Geoff. Just last month he turned 30. How can a one-time prodigy be a late-bloomer? Time was running out. Mitchell saved his best for a game that Australia was desperate to win. The once mighty cricket nation showed they weren’t slipping, they could excel at the game’s most famous format too. And for that they needed to thank Marsh III. After his game-changing hand, the glee on his face and the genuine joy of those around him showed how important the inning was for him and for Australia. Always the team team, Mithchell till very recently was once more famous for being the team’s vlogger. He would move around with his camera in the dressing room speaking to the star performers. At Dubai on Sunday, there was a queue to interview the man of the moment.

It was all yellow… again

Amidst the sea of fielders dressed in black a few ‘pitch-invaders’ in yellow made their way onto the turf before the ball could get to the ropes. If this was a Harry Potter flick, this would be when Albus Dumbledore waved his hand, or wand, and the scarlet decorations portraying West Indies’ domination would be replaced by the yellow banners of the new T20 World Champions, Australia. Then again, at the venue in Dubai, the decorators need not search for the required colours. It’ll already be there since just a short while ago the Chennai Super Kings – the yellow-wearing victors of the IPL – had stormed the ground to win the title.

Matthew Wade, the man who doesn’t love wicketkeeping, dropped a catch from Daryl Mitchell, off Glenn Maxwell. But a over later, he had his redemption and lunged forward to remove Mitchell, off Josh Hazlewood this time. Mitchell had shaped for a cut, off Maxwell and got an inside edge and it did dip and not easy but we have seen better keepers take that. Wade had his eyes off the ball. Not sure how he has been off the field in the nights before the games in this tournament, but when he was keeping in Tests, by his own admission he would be a nervous wreck. “The night a game before I would be stressed about keeping – for 10 years I did that,” Wade had once said. “I was like ‘oh I have got to keep tomorrow, I hope I don’t f*** it up’. You have so many things you are thinking about when you are down in your squat, hundreds of them. Your mind is ticking all the time. I was absolutely toast by the end of the Test. Luckily for him, Mitchell gave another chance which he grabbed. The nerves would have eased.

Aaron Finch’s toss luck has to be his rivals’ envy and Australia’s pride. Winning six out of seven tosses in a tournament where batting second has offered a distinct advantage, cancels out luck factor and defies the probability theory. No wonder, the Australia white-ball captain looked happy after winning the toss in the final and his Kiwi counterpart Kane Williamson opted for indifference. Williamson had to take Finch’s toss luck with a pinch of salt. The Aussie skipper reckoned that the pitch for the final was a “bit drier than the one from the other night (semifinal)”and hoped that it would “skid on” (later). Phlegmatically, Williamson admitted that he would have chosen to field as well. “Who knows about the dew, but important we focus on that task at hand,” he said at the toss.

Hazlewood in a haze

Can’t really blame Josh Hazlewood for dropping a catch of Kane Williamson. Perhaps he was stunned that the batsman had actually hit a ball with some power. Shocked that it reached near the boundary. Surprised that he had to wake up suddenly on the field. Until, then, it had seemed a slow stinker of a game, meandering along on a two-paced pitch. It was a slower full toss from Mitch Starc in the 11 hover and Williamson was done in by the change of pace but went through just with his front hand and the ball flew to deep backward square-leg where Hazlewood clanged it. That woke up Williamson, who hit two more successive fours – a straight drive and a pull to bring some drama into sombre proceedings.

Was it Kane Williamson or Lance Cairns, circa 1983? Chris’s father Lance and his one-handed six with his famous Excalibur bat off Dennis Lillee is part of folklore in New Zealand. Kane did it off far more gentler pace of Glenn Maxwell. It was floated on the leg stump line and Williamson went for the big heave-ho and took his top hand off the handle and flung the ball over midwicket boundary. Just like Lance did 38 years ago. Of late, Rishabh Pant has been popular with the one-handed six. Now Kane joins in. He had already a one-handed four – that drop catch by Josh Hazlewood – and now a stunning six.

3 metres… this way or that

Aaron Finch won’t be complaining about the three-metre rule in DRS situations that saved him from a lbw decision. He didn’t last long, holing out to the deep, but let’s return to that lbw appeal. Already standing outside the crease, he skipped further down but missed the no-backer from Trent Boult and was struck on the pad. The umpire denied the appeal and New Zealand didn’t go for the DRS as it was clear that the point of impact was over 3 metres.

In 2018, Finch was on the other side of the 3m rule and found it very strange and had wanted a rule change. “About the three metres … pitching in line, hitting in line, hitting the stumps – to me that’s strange. Where 3m is down the wicket, if it’s still hitting the stumps and hitting in line can we tinker the rule. I know it’s sounding sour at the moment because we’ve been on the receiving end, but it’s certainly not. We understand where the rule’s at now. but maybe if it’s hitting in line and if all three (pitching point, impact with pad, impact with stumps) are still red, maybe there’s a chance to overturn it.” This time, he was saved because of that same rule. But it didn’t last long as Boult saw him advancing down the track and fired in a short one to take him out.

Remember the Casio calculator – MG880 was it? – from the 1980s. It used to have a silly little game on it. Looking back they had the graphics much better than the all-new latest fad from the broadcasters of the T20 world cup. The graphic of batsmen running between the wickets while the camera follows the fielder is occasionally shown on the left-hand side of the screen in a sidebar. It’s so retro – not necessarily nice romantic retro but Boomer tech. It looks artificial and so low-tech.