Images from the T20 World Cup match between Sri Lanka and England, at the Sydney Cricket Ground, on Saturday.

Pathum Nissanka sizzled with a fine half-century but England’s bowlers roared back to restrict Sri Lanka to a modest 141 for 8 in their must-win T20 World cup match in Sydney on Saturday.

Nissanka provided the perfect start as he blazed his way to a 33-ball 50 after they elected to bat.

The stylish opener took the English attack to the cleaners, slamming five sixes and two fours in a 45-ball 67, before Adil Rashid (4-0-16-1) brilliantly turned it around. The leg spinner dismissed Nissanka to bag his maiden wicket of the tournament.

Seamer Sam Curran (4-0-27-1) also bowled a tidy spell in the middle overs as Sri Lanka, who were going at eight runs-plus an over at the halfway mark, went into a quiet phase in the back-end.

The lack of power-hitters down the line cost the Lankans dear as boundaries dried up and they could manage just 25 runs in the last five overs during which they lost five wickets.

England pacer Mark Wood also overcame a woeful start and hit his straps at the back end to return figure of 3 for 26 as England denied the opposition about 15-20 extra runs. 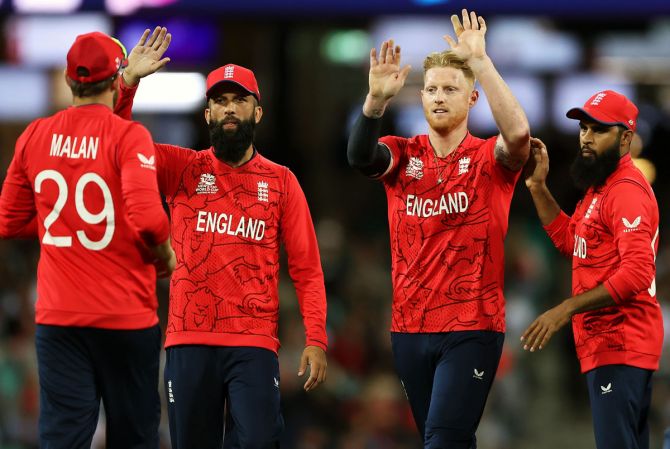 On a dry SCG wicket, struggling English Test skipper Ben Stokes began the proceedings with the new ball as the Sri Lankan opening duo of Kusal Mendis and Nissanka were off to a cautious start.

Skipper Jos Buttler brought Wood, his pace ace, in the third over and Mendis took him down the very first ball with a six over deep square leg. Taking a cue from his opening partner, Nissanka finished the over with another maximum as the over yielded 17 runs.

Just when the Lankan openers were getting into the groove, Liam Livingstone grabbed a superb sliding catch to dismiss Mendis (18, 14b, 1×4, 1×6). Rashid’s entry slowed down their run-rate and wickets kept on falling at the other end but Nissanka maintained his counter-attacking approach en route to a 33-ball fifty, his second in this World Cup and ninth overall.

But Rashid and Curran brilliantly pegged the Lankans back with their smart variations.

The English leg-spinner also claimed the prized-scalp of Nissanka just at the start of the crucial slog overs’ stage.

Nissanka tried to charge Rashid down the ground only to mistime the hit and was caught by substitute Chris Jordan.

England also seemed to have suffered an injury setback when their batter Dawid Malan walked off the field with a suspected groin injury.