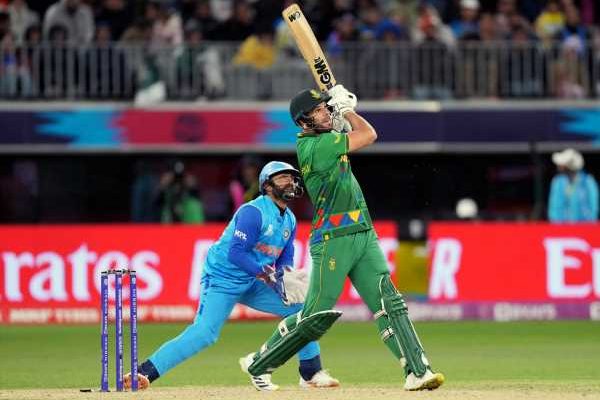 Aiden Markram said South Africa are taking nothing for granted despite beating India on Sunday to put themselves in the driving seat for qualification for the Twenty20 World Cup semi-finals.

The victory by five wickets on a tricky track at Perth Stadium put the South Africans top of Group 2 with five points, one clear of India and Bangladesh with two Super 12 matches left to play.

Only the top two go through but with Zimbabwe (three points), Pakistan (two) and the Netherlands (0) all still technically in the hunt, Markram said South Africa were focusing only on improvement.

“If we are top of the log, I suppose it’s a good thing but we’re certainly not thinking with a foot in the door at the moment,” the right-hander said.

“We’ve still got a massive game against Pakistan and we’ve got Netherlands as well. And we’ve seen the teams that have joined the Super 12 stage can beat any team on their day.

“So there’s still a lot of cricket to be played for us. And it’s pretty much about trying to get better game-by-game. We give ourselves the best chance to qualify if we do.”

South Africa, who are targeting a first limited overs World Cup triumph, arrived in Australia looking to their pace attack to give them an edge.

The fast bowlers delivered in Perth with Lungi Ngidi taking 4/29 and Wayne Parnell 3/15 to help restrict Kohli and co to 133/9.

The batters have also held up their end with all of the top five in the order barring skipper Temba Bavuma managing a significant innings over the first three games.

Markram said the team were all behind Bavuma as the opener tried to snap a poor run of form which has seen him scratch out 14 runs in three innings.

“I think every player goes through these sort of form slumps,” said the 28-year-old, who scored a half century against India.

“I’ve been through it more than once, unfortunately. It’s always just one knock away, and that’s sort of the message that Temba has been given for the time being.”

South Africa meet Pakistan in Sydney on Thursday and round out the Super 12 against the Dutch in Adelaide on Sunday.