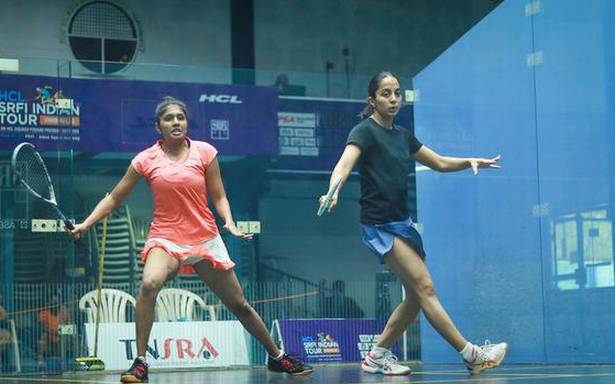 Velavan sets up a summit clash with Pradhan

Tanvi Khanna has a languid grace about her that is a real treat to watch. The 25-year-old uses the angles of the squash court well and moves around without making much of an effort.

Seeded two, the Delhi lass dismantled Aparajitha Balamurukan 11-4, 11-5, 11-6 in the semifinals of the HCL-SRFI Indian squash tour tournament, a PSA Challenger Tour-10 event, at the ISA courts here on Wednesday.

Aparajitha was no match for Tanvi as the latter was comfortably ahead in all three games. Aparajitha did well in the second game, using her power from the backcourt to unsettle Tanvi, but that was only for a brief while.

Akshaya Sri showed a glimpse of her potential against Sunayna in the second game, pushing the top seed to the maximum, but when it came to the crunch, Sunayna was always up to the task.

While Velavan was rock solid both in front and at the back in his win over Abhishek Agarwal, Pradhan was very impressive against the 20-year-old Rahul Baitha.