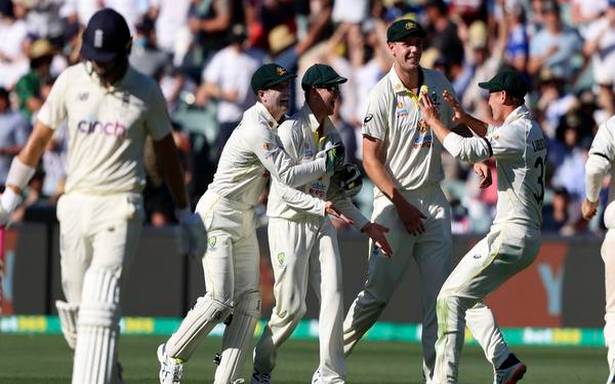 England collapses after a wicketless first session on Day 3

Replying to Australia’s first innings total of 473-9(declared), England were all out for 236 on Day 3 of the second Ashes Test on Saturday.

Dawid Malan top-scored for the touring side with a patient 80, while skipper Joe Root scored 62.

Mitchell Starc (4-37) and Nathan Lyon (3-58) claimed the bulk of the wickets for Australia who are 1-0 up in the five-test series.

Wikcetless opening session, and then a collapse

England captain Joe Root and number three batsman Dawid Malan struck unbeaten half-centuries in the first session, batting through an wicketless opening session to steer England to 140-2 at dinner on Day 3 of the day-night Ashes Test.

Root was on 57 at the dinner break, cementing his place as the year’s top test run scorer, while Malan was on 68 with England still 333 behind Australia’s first innings total of 473-9 declared.

After Root was dismissed by Green, Malan followed with England adding just seven runs after their captain’s dismissal. The rest of the English batting order could only add a total of 79 runs, with Ben Stokes (34) and Chris Woakes (24) scoring 58 of them.

On Saturday, play began 20 minutes early to make up for lost time on Friday night when lightening halted proceedings with England trailing by 456 runs but with eight wickets in hand.