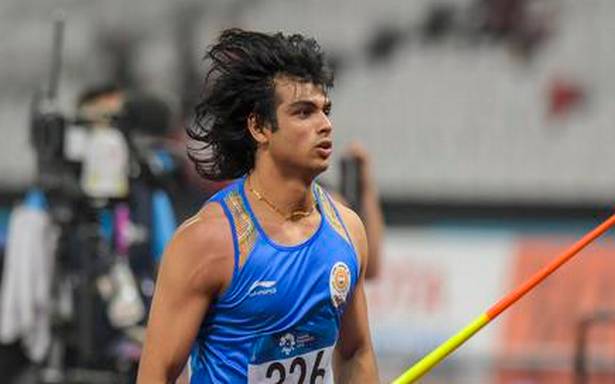 Will try my best to get a medal for the country, says the Asian Games champion

Javelin thrower Neeraj Chopra had an idea of what the field could look like at the Tokyo Olympics during the recent Kuortane Games in Finland.

Chopra, the brightest prospect to win independent India’s first-ever athletics medal at the Olympics, wished he could have got more such events on the road to Tokyo. The Finland meet where Chopra finished third with 86.79m and which Vetter won with 93.59m, was the only strong meet he did this year.

“That gave me a natural feel of top-class competition. The more such competitions I do, the better it is,” said Chopra, from his training base in Uppsala in Sweden, on Sunday.

“I had to make changes to my training and competition schedule because of the COVID-19 situation. I have to plan well so that I’m at my peak in Tokyo. My training is now going well and I’m ready. I’m trying to do my best but it depends on the day. I will try my best to get a medal for the country.”

Chopra, who has a personal best of 88.07m, had hoped to do the July 13 Diamond League in Gateshead (England). “But getting the UK visa was difficult, so I had to skip the Diamond League. There is no time for competition now. I’ll now have intense training for a week and then will go to Tokyo on July 26,” said the 23-year-old, currently No. 4 in the world list this year.

He is now working on his technique. “I was giving more height in my throws, I want to reduce it a bit so that I’ll get longer throws… and I’m improving,” he said.

With expectations on him huge, is Chopra under pressure?

“There was more pressure during the Commonwealth Games and Asian Games. I have learned to handle the pressure of the Olympic Games,” he said.

He listens to music, virtually working out the competition in Tokyo in his head, and does a bit of meditation to stay cool.

The word from Japan is that the quarantine rules and restrictions will be tougher for Indians than for many others.

“Only after I get there, I will know about the arrangements. I just need two to three hours of training.”