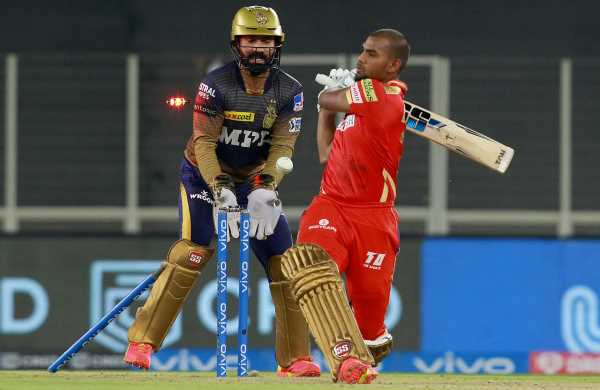 The Punjab Kings batting line-up continues to blow hot and cold to leave the team struggling in the bottom half of the IPL points table.

Their batsmen rose to the challenge against defending champions Mumbai Indians to score an emphatic nine-wicket victory in their previous game, but came up with a shocking performance against Kolkata Knight Riders in Ahmedabad on Monday as they suffered a five-wicket thrashing with 3.2 overs to spare, in Ahmedabad, on Monday, April 26.

After being put in to bat, Punjab Openers K L Rahul and Mayank Agarwal took the surprise approach of starting off cautiously in the early overs instead of taking on the bowlers in the Powerplay.

With KKR’s bowlers keeping things tight and bowling to their field, it was not long before the pressure tactics paid off.

Rahul tried to get his team back on track after the slow start, but perished as he was caught by Sunil Narine off Pat Cummins for 19.

In the next over, Punjab suffered another major jolt as the dangerous Chris Gayle was caught behind off Shivam Mavi for a first-ball duck, while Deepak Hooda was caught at point for one as wickets kept falling regularly.

Agarwal struggled to find his bearings on the slow Ahmedabad wicket. After spending considerable time at the wicket, he failed to convert his start and perished after a sedate 31 from 34 balls.

Nicholas Pooran looked to be getting back among the runs as he hit Varun Chakravarthy for a six and four in the 13th over, before the bowler got revenge by bowling the West Indian in the very next over.

Shahrukh Khan made his intentions clear as he slogged Narine for a six over midwicket but was caught by Eoin Morgan off Prasidh Krishna for 13.

Chris Jordan swung his bat around in the final overs to stroke a quickfire 30 from 18 balls to add some respectability to the total.

Punjab’s flop show with the bat can be gauged from the fact that the best partnership of their innings was the lacklustre 36-run opening stand, but it came off 34 balls.

After that no other batsmen were able to battle it out and stitch together partnerships to get their team back on track.

Punjab’s batting line-up disappointed big time as they finished on a below-par 123-9 in their 20 overs. KKR chased down the total easily.