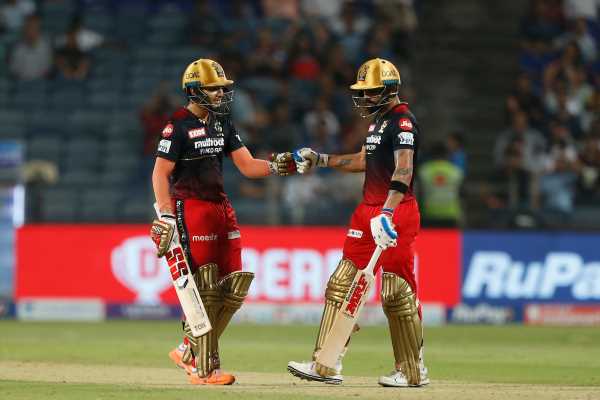 Royal Challengers Bangalore’s successful run chase featured one crucial aspect which was missing in the Mumbai Indians innings of 151 and that was the absence of a solid top-order partnership — batters with the ability to play through a major chunk of the 20 overs on offer.

That MI crossed the 150 mark was largely down to a miraculous and rather inspired innings by middle-order batter Surya Kumar Yadav in the death overs.

Onto the RCB innings and the one thing which was clearly evident in the opening overs was that both Faf du Plessis and Anuj Rawat were hoping to avoid the type of batting collapse that Mumbai experienced and were cautious and measured in their stroke-play.

They were cruising at a healthy partnership of 50 off 49 balls (run-a-ball rate) when du Plessis departed for 16.

While du Plessis had been content to sit back and allow Rawat to take the lead in the partnership and go for the big shots, such was not the case when Virat Kohli arrived at the crease.

The former RCB captain got off the mark immediately, pushed Rawat to convert ones into twos. Together they added a crucial 80 runs off 52 balls for the second wicket, thereby denying any chance of a Mumbai comeback.

Kohli had a very active contribution in the partnership and his 48 from 36 balls bears testament to that effect.

Eventually, the duo batted through to the 17th over and by then the damage had been done. Exactly ten deliveries after Rawat’s dismissal, Glenn Maxwell smashed a four to win the match for RCB, sending the Mumbai Indians crashing to their fourth consecutive defeat.