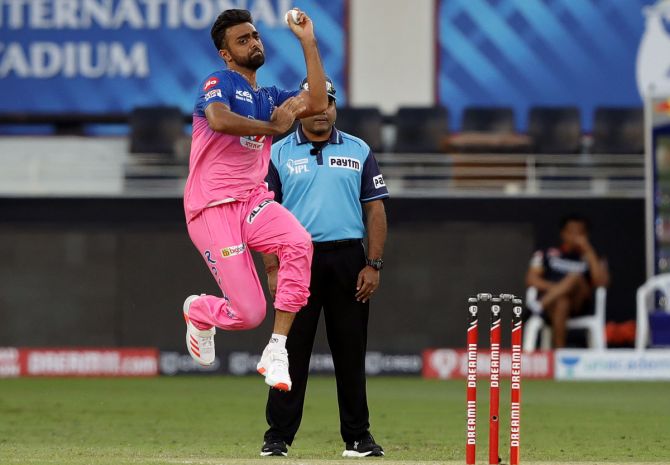 In close run chases, teams always prefer to use their best bowler for the 19th over.

But Rajasthan Royals thought otherwise and saved Jofra Archer for the final over, and brought on Jaydev Unadkat for the penultimate over in their IPL game against the Royal Challengers Bangalore.

With 35 needed from two overs for victory, it would have made sense to get Archer into the attack and force the RCB batsmen, especially A B de Villiers, to take a few chances against the best bowler in the Royals’ line-up.

However, Captain Steve Smith took the gamble by having Unadkat bowl to the dangerous de Villiers, and the decision backfired spectacularly.

What made Smith take that decision of going with Unadkat who surely was short in confidence, as he was being hit for nearly 10 runs per over in IPL 2020?

Unadkat went for his trusted slower ball first up, but de Villiers swung it high over midwicket for a six.

The left-arm pacer bowled the next ball fuller, but again he went for the slower ball which was smashed straight down the ground for another six.

The pressure seemed to have taken its toll on Unadkat, who bowled a half-tracker, and de Villiers pulled it over square leg to make it three sixes in a row and turn the contest on its head.

Unadkat finally got it right as he bowled the yorker which de Villiers blocked on the off-side for one before the left-armer tried the slower bouncer again which went high over Gurkeerat Singh Mann and was ruled a wide.

He continued to dish out freebies as Mann got a wide half-volley which he carved over the covers for a four and then picked a single off the last ball, to make it a huge over.

Unadkat was smashed for as many as 25 runs which all but sealed the contest in RCB’s favour even though 10 runs were needed off the final over bowled by Archer.

There was surely no stopping de Villiers at the end and he launched Archer for a six over midwicket in the final over to take RCB to a seven wicket victory, with two balls to spare.