UEFA EURO 2020, England vs Germany Live Score Streaming Online: England and Germany meet for the first time after 2010 World Cup for a spot in the European Championship quarterfinals 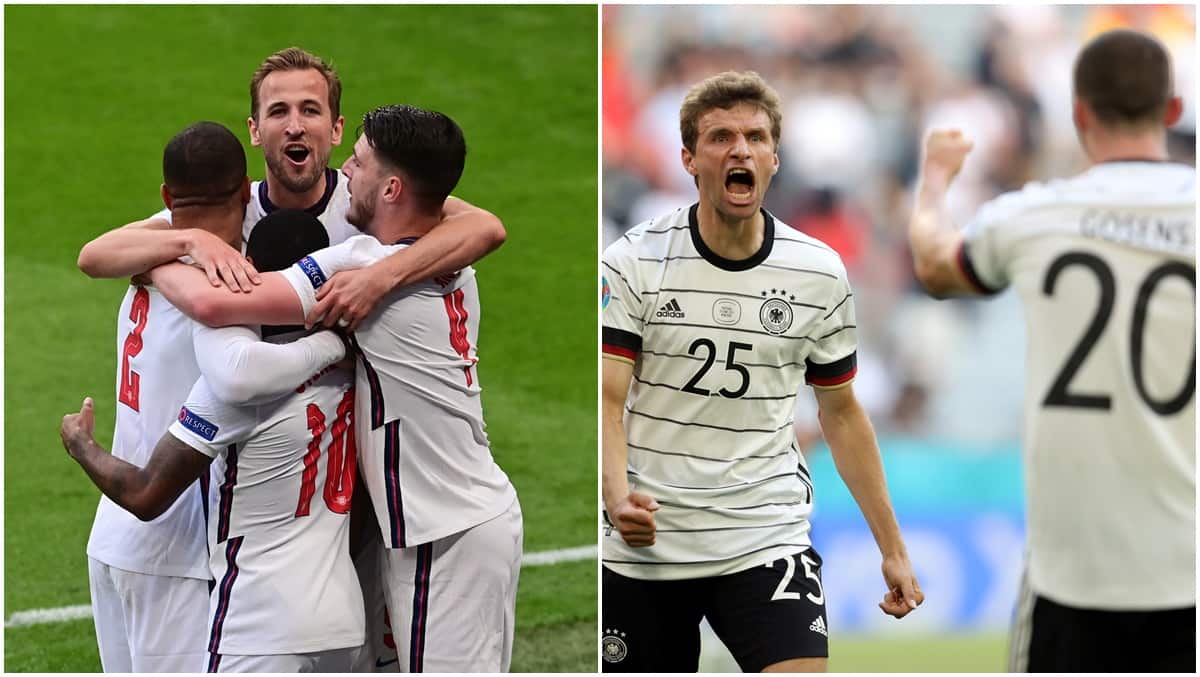 UEFA EURO 2020, England vs Germany Live Score Streaming Online: England will attempt to beat Germany in a major tournament knockout game for the first time since the 1966 World Cup final when they meet in Tuesday’s Euro 2020 last-16 tie at Wembley. England beat West Germany in extra time in the 1966 World Cup final for the national team’s greatest football triumph. But the West Germans won 3-1 in the 1972 European Championship quarterfinals and then won on penalties in the 1996 semifinals.

England’s group games produced just two goals, a stalemate with Scotland sandwiched between 1-0 wins against Croatia and the Czech Republic. Germany have been less predictable. The 1-0 defeat against France and 2-2 draw with Hungary will not be viewed with fondness but, in between, they produced a scintillating display to down Portugal 4-2.

Sterling knocks past Ginter before the centre-back drags down Shaw on the left flank. Ginter gets warning, shown yellow for the tackle or the dissent that followed.

Luke Shaw sends the ball towards far post, an under-pressure Stones tries to attack. Goretzka catches Saka late in the middle of the park.England get a chance to move forward their centre-backs. Saka insists he is fouled by Kroos but referee waves ‘keep playing’.

England have settled down at Wembley. Raheem Sterling forcing a diving save out of Manuel Neuer before Harry Maguire’s header is kept out. Maguire is unmarked but doesn’t get past Neuer. Two chances in two minutes for England as the hosts are picking up the momentum.

Havertz smashes the ball into the England’s defensive wall in front of Pickford’s goal. Germany have been the better of the two sides ten minutes into the match.

Goretzka breaks through the middle of the English defence, reaching the edge of the area before Rice drags him down. Referee Makkelie awards the free-kick and cautions the West Ham defender.

The first chance of the match comes as Goretzka angles a long-range right -footed effort towards the bottom left corner. Pickford moves across before comfortably saving as he eases himself into his first involvement of the game.

The players are out on the field for the big clash. National anthems underway at the Wembley. Match to kickstart in a few minutes. Both the sides take the knee ahead of the clash against racism.

The captains of Germany and England will wear rainbow armbands in the round of 16 at the European Championship. The England team says the move by Germany goalkeeper Manuel Neuer and England striker Harry Kane is “to mark the end of Pride month.” UEFA had looked into whether Neuer breached regulations by not wearing the official armband in the opening two games of Euro 2020. But Germany later said UEFA accepted its argument that the rainbow armband is a symbol of diversity and can therefore be categorized as a “good cause.”

England coach Gareth Southgate is deciding whether to include Mason Mount and Ben Chilwell in the squad to face Germany at the European Championship after a week in self-isolation. The players had to split from the rest of the England squad after being deemed close contacts following a conversation with Chelsea teammate Billy Gilmour after the match against Scotland. Gilmour later tested positive for the coronavirus. Mount and Chilwell were able to do fitness work away from the rest of the England squad on a training field. Mount started two group games at Euro 2020 before missing last Tuesday’s win over the Czech Republic while isolating.

It’s England against Germany. At Wembley Stadium. Again. It’ll be the round of 16 at the European Championship this time but there have been some other big ones in the past. England beat West Germany in extra time in the 1966 World Cup final for the national team’s greatest soccer triumph. But the West Germans won 3-1 in the 1972 European Championship quarterfinals and then won on penalties in the 1996 semifinals. The match at Wembley is the first one of the day. Sweden will face Ukraine in the late match in Glasgow.