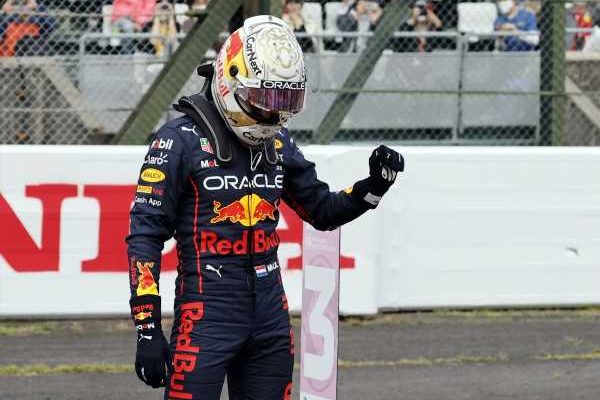 Max Verstappen put himself on course to wrap up a second successive Formula One title in the Japanese Grand Prix by edging Ferrari rival Charles Leclerc to pole position in qualifying at the Suzuka circuit on Saturday.

The 25-year-old hustled his Honda-powered Red Bull around the popular figure-of-eight layout in one minute, 29.304 seconds, beating Leclerc by just 0.010 seconds.

Carlos Sainz was 0.057 seconds off the pace in the other Ferrari in third.

Verstappen came under investigation for dangerous driving after appearing to swerve into the path of McLaren’s Lando Norris but was let off with a reprimand.

Norris was forced to drive off the track and onto the grass to avoid contact and said he expected Verstappen to be penalised. But replays showed the tail of the Red Bull stepping out, with stewards noting that Verstappen had temporarily lost control of his car on cold tyres.

“It was incredible to drive here again, of course very happy to be on pole but just super happy to be back here,” said Verstappen, after taking the 18th pole of his career and the fifth this season.

Sunday, he added, “will be interesting with the weather, I’m quite confident we have a good car.”

Verstappen leads Leclerc by 104 points in the overall standings and needs to score eight more than the Monegasque to wrap up proceedings on Sunday.

That means he will be champion if he wins with the fastest lap ahead of Leclerc.

But with rain affecting Friday’s practice session and threatening to hit again on Sunday, the race could be far from straightforward.

Verstappen had been favourite for pole heading into the session after having set the fastest time in Saturday’s final practice.

But Leclerc seemed on the verge of causing a last-gasp upset on his final flying lap even as Verstappen, on provisional pole, did not appear to be improving on his earlier benchmark.

In the end it was not quite enough, with Verstappen’s first flier good enough for pole.

“I lost the tyres in the last sector, so lost some time,” said Leclerc, who has started from pole nine times this season but won only thrice.

“Let’s wait and see the conditions, should be a fun race,” he added.

Mercedes have enjoyed an unbeaten run at Suzuka stretching back to 2014 but that streak looks set to come to an end with Lewis Hamilton, the team’s highest-placed driver, in sixth.

Sebastian Vettel, driving around Suzuka for the last time as he prepares to retire at the end of the year, was an ecstatic ninth for Aston Martin.

Norris rounded out the top ten.

Home hope Yuki Tsunoda, racing a Formula One car in front of his fans at Suzuka for the first time, was 13th.

Sunday’s race at Suzuka will be the first since 2019, with the Japanese Grand Prix absent from the calendar for the last two years because the COVID-19 pandemic.