‘When the team is struggling, he is the one who wants to step up and play that important innings.’

India’s tour of the West Indies saw the emergence of Hanuma Vihari.

The Andhra right-hander hit a century and two fifties in the two Test series to finish as the highest run-getter in the series with 289 runs, at an average of 96.

Vihari’s temperament impressed everyone as he grabbed the opportunity with both hands after being preferred over Rohit Sharma for the No 6 position.

The 25 year old started with a fifty on Test debut against England last year before delivering a string of few low scores in Australia, but made sure not to let the opportunity go abegging in the Caribbean.

His childhood coach John Manoj had predicted he would make it big a long, long time ago.

“I have said this long back that Vihari is going to be the next V V S Laxman from our cricket academy,” Manoj tells Harish Kotian/Rediff.com.

“His sincerity, commitment, dedication and hard work stood out even when he was young. He was always looking to hit around 300-400 balls a day,” points out Manoj, when asked why he made that prediction.

Manoj vividly remembers how Vihari joined his academy aged just 11 and him helping the family get admission in St Andrew’s school, where he worked as director of sports.

“His father came to me and asked me for the school admission for Vihari at St Andrew’s school because the family was struggling to meet the education and school fees then. I told his parents not to worry and arranged the admission in the school for them,” he recalls.

Under Manoj’s tutelage, Vihari made an instant impact in school cricket, plundering tons of runs and soon was elevated to the captaincy of the team.

But the youngster suffered a huge jolt a year later when his father passed away. That loss made him even more determined and he scored a half-century a couple of days after that.

After debuting in first class cricket in 2010, Vihari played for Hyderabad in his first few years in domestic cricket before switching over to Andhra in 2016, a move which paid dividends.

Former Andhra player M S K Prasad became the chairman of the selectors and it was not long before Vihari made it to the Test team on the weight of his bulky scores in domestic cricket.

Manoj says Vihari may not be as stylish or entertaining as the two, but he certainly can his hold his own in Tests.

“Vihari’s strength is his defence. Azharuddin and Laxman had their own strengths and own style of batting. Laxman was so good with the wrists, Azharuddin was brilliant too, from the off-stump he could play the ball to square leg.”

He averages a healthy 60 in 75 first class matches — the highest in the world currently among active cricketers — ahead of the likes of Virat Kohli (53), Steve Smith (59) or Cheteshwar Pujara (53) and it all due to his disciplined approach to batting.

“Vihari generally likes to play in the V (playing straight in the arc between mid-off and mid-on). He has all the shots too, like the cover drive, the square cut, the on-drive, the sweep shot and he can play the lofted shots too when needed,” says Manoj.

He also points out that one striking quality of Vihari, which will stand him in good stead in international cricket is his ability to thrive under pressure.

“I want to say that Vihari is one batsman who likes to play under pressure. When the team is struggling, he is the one who wants to step up and play that important innings because he likes to take on challenges; that has been his strength from the childhood days.

“The only thing on his mind when he is batting is to secure his wicket. He has got a different attitude. But, at the same time, he is severe on any loose delivery and very good at finding the gaps and rotating the strike with singles. So it is difficult to tie him down,” he added. 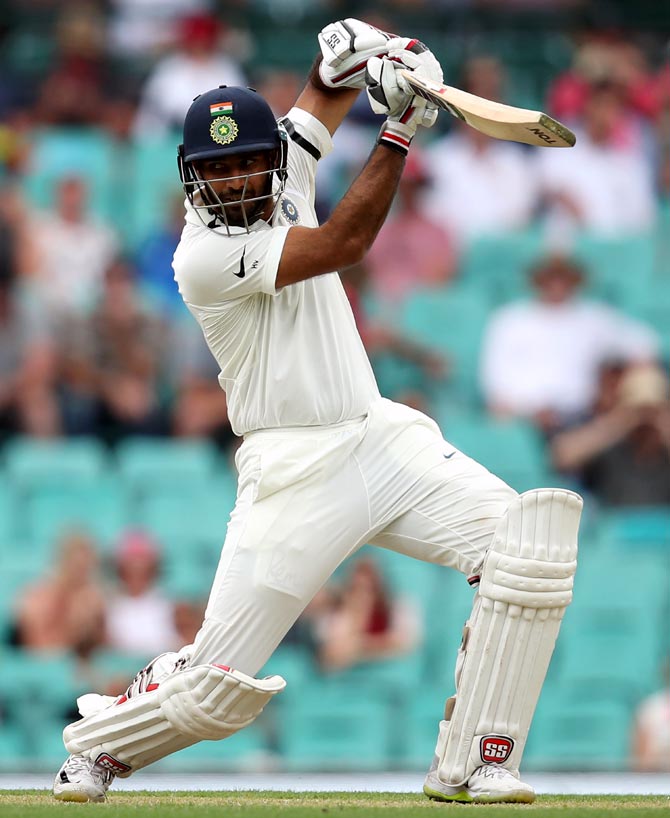 Vihari had a brief chat with his coach after narrowly missing his maiden Test century in the first Test against the West Indies, but ensured he got it in the very next match with his focussed approach.

“That 93 taught him a lesson on how to get a Test century. Though he was not in a hurry when he got out for 93, sometimes luck also plays a role. Then, in the next match, he spent nearly 40 minutes to get from 82 to 86. And he also got good support in Ishant Sharma at the other end, who batted really well.

“I sent him a message after he missed the century saying ‘There is always a next time and a next game’ and so it happened!

“I was so happy when he got the hundred. We were waiting for this day because a first hundred for the country is always special and getting it overseas makes it even more special,” says Manoj.

Vihari has already picked five wickets in the six Tests he has played so far, including that of Alastair Cook in his final Test last year. His bowling gives him the edge, believes Manoj, and he could easily play as the third spinner in Indian conditions.

“For Vihari, his bowling and fielding are his two big plus points. I think he should bowl more in the nets and work upon his bowling. Virat Kohli believes in his bowling and used him well in England where he got wickets. In Indian conditions, you can think of Vihari as the third spinner.”

For now, Manoj’s target for his ward is pretty clear: Win a place in the Indian ODI team and be part of the 2023 World Cup squad, to be played in India.

“He needs to be consistent. As a coach, and someone who knows him personally, I want him to target the 2023 World Cup because it will be played in India. India will definitely need a solid middle order batsman like him in the ODI team and he can also bowl some overs in the middle.”