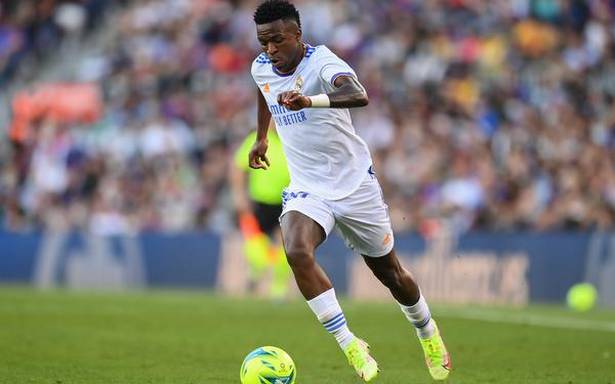 Once the subject of cruel jokes and mocking memes, the 21-year-old winger has captured the imagination of Real Madrid fans — and the footballing world at large — with both style and substance

Something very significant occurred when Getafe beat league leader Real Madrid 1-0 on the second day of the new year. Madridistas realised just how different the team looked without Vinicius Jr., once the target of unflattering jokes. The Brazilian winger had been ruled out because of a positive COVID-19 test, and Real, faced with a Getafe side that sat back after taking the lead, lacked both inspiration and incision.

Carlo Ancelotti’s men needed a line-breaking dribbler. None of the Real side that played that day seemed prepared to take a chance against the low block — something Vinicius excels at. This season, the wonder kid has routinely topped the charts for carrying the ball, whether it’s progressive carries, carries into the final-third, or carries into the penalty area, as per LaLiga statistics. He is among the league’s top dribblers, successfully completing almost three dribbles per game.

Real also sorely missed Vinicius’ end product: the 21-year-old is in the middle of a breakthrough season, racking up the sort of goals and assists numbers that turn heads. His 10 goals and four assists in 19 LaLiga appearances are second only to Karim Benzema (15 goals, seven assists) among Real players; indeed, he is the first footballer born in 2000 (or later) to notch up 10 goals in a Liga season. Moreover, Vinicius has decided big games this season. Against Barcelona, Atletico Madrid and Sevilla, his prodigious talent made a difference.

This marks an extraordinary turnaround for Vinicius — in public perception, media coverage and, to a degree, his team’s estimation. Ever since he was signed from Flamengo in 2017 for 45 million euros, which made him the most expensive under-19 player and the second costliest Brazilian in history after Neymar at that time, Vinicius was burdened with unreasonable expectations.

It didn’t help that Barcelona had competed with Real for his signature: when he lost the ball attempting a dribble or missed a goal, memes would go viral among the Catalan press corps and fans. This was in addition to whispers in several Barca circles that he was actually a Barcelona fan and had only chosen Real for the money.

In his first three seasons, he was often derided as a showboater — dribblers are frequently subjected to this, for it’s easy to look foolish when taking a risk; the courage needed is seldom appreciated. There was just criticism, too, about his decision-making, but even that was often conveyed in sweeping statements in the Spanish press. It didn’t seem to matter that he was a teenager adapting to a different continent and dealing with the pressure of playing for perhaps the biggest club in the world.

The lowest point came during a game against Gladbach in 2020, when Benzema was caught on camera telling Ferland Mendy not to give Vinicius the ball because “he is playing against us”. It’s impossible to begin to understand the amount of resilience needed to bounce back from such a moment — not only is Benzema one of Vinicius’ idols, there are few worse feelings in team sport than your mates losing regard for you and expressing that sentiment in brutal fashion.

In an interview with El Pais, Vinicius offered a sense of the pressure he was under. “[It’s] worse than anywhere here, the greatest club in the world. It doesn’t matter whether you’re Sergio Ramos after years here or myself, Rodrygo or Ferland Mendy who are more recent arrivals. If you’re playing for Madrid none of that counts — only winning. When I arrived they’d won four out of five Champions Leagues — just as Cristiano [Ronaldo], the greatest legend in the club’s history, was leaving. All of that was complicated, but I carry the pressure on my shoulders pretty well.”

Remarkably, Vinicius persevered, turning things around to such an extent this season that he has formed one of the world’s most lethal strike partnerships with Benzema. And the French veteran’s opinion has changed — his eyes seek out Vinicius’ runs these days and he makes his own runs in the expectation, not hope, that his young partner will find him.

Ancelotti’s arrival and the stability the seasoned manager has managed to establish have played a part in Vinicius’ coming-of-age season. Under the Italian’s avuncular care, the 21-year-old said he felt secure. Ancelotti deflected the compliment, but did reveal what he asks of his star boy.

“All I always ask of him is to be effective,” Ancelotti said. “If he thinks it’s fair to dribble, he has to do it, but dribbling for the sake of it, that’s not it. He has something special in his feet. I knew he was strong in one-one-ones, with his pace, but he’s surprising everyone now with his capacity to score. It’s another step he takes to be one of the best in the world.”

While Ancelotti deserves credit for backing Vinicius, the young winger has taken personal responsibility for improving his game. He is, by several accounts, one of Real’s hardest trainers, often doing extra work after team sessions. He began to focus on bettering his finishing during Zinedine Zidane’s reign and has reportedly also started working with a sports psychologist.

The efforts are paying off. After a potential-affirming 2021, Vinicius is widely regarded as one of the world’s most valuable players. Respected football portal Transfermarkt estimates his market price to be around 110 million euros. CIES Football Observatory, which recently drew up a list “based on what players have achieved to this point, their age and the duration of their contract left”, said he was the most valuable under-23 player in the world.

It’s no wonder then that other European super clubs are sniffing around Madrid. PSG and Manchester United are among the clubs reportedly interested, but perhaps the most intriguing link is Liverpool, for it reveals an oft-overlooked aspect of Vinicius’ game: his work-rate off the ball. Ancelotti has talked up his left-winger’s defensive contributions, and Liverpool, which values how well a player presses, reportedly views him as a Sadio Mane analogue — high praise indeed.

Real and Vinicius seem in no hurry to part, though. Vinicius has always said the Bernabeu is his dream home, and there is talk of Real extending his stay with a new contract offer. There is also talk of inserting a quite incredible one billion euros release clause. His current deal expires in 2024, and so there is time to open negotiations. But, according to reports in the Spanish media, there is recognition among the club hierarchy that Vinicius, among the lowest earners on the playing payroll, must be rewarded in a fashion that reflects his value to the team.

While Vinicius has conquered several challenges, others remain. “Vini knows that games are going to be more difficult for him now,” teammate Casemiro said. “People have realised that he’s a top player. He’ll be man-marked, sometimes by two or three players, but when he gets the slightest chance, he has to make the difference.”

Given how Vinicius has responded to pressure at such a young age, there is every likelihood he will continue to “make the difference”.

(With inputs from Reuters)