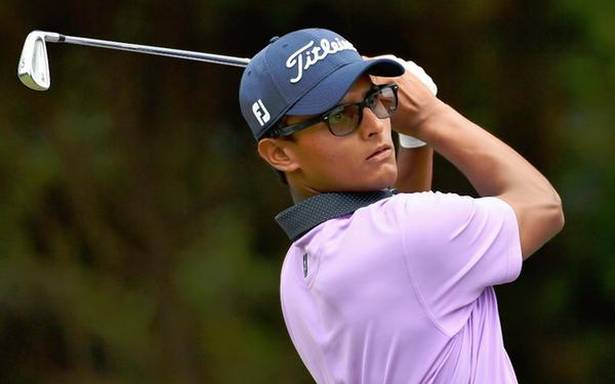 Catches up with Khalin Joshi for joint lead

Viraj Madappa’s flurry of five birdies over the last six holes, coupled with overnight leader Khalin Joshi’s final-hole bogey, saw the two share the lead at 12-under 204 after the penultimate round of ₹70-lakh Tata Steel PGTI MP Cup golf tournament at the Delhi Golf Club course on Thursday.

Playing two groups behind the leader group, Madappa signed off the day’s best six-under 66 with his seventh birdie. Khalin, leading by one stroke after the penultimate hole, dropped a shot on the par-5 18th after a wayward tee-shot for a 69 and let Madappa get a share of the lead.

The duo is two strokes ahead of Angad Cheema who shot a 67.

The day clearly belonged to Madappa. The Kolkata-based 23-year-old, who finished his second round of 67 with a double-bogey, took the turn at 35 after a ninth-hole bogey.

But on the inward nine, Madappa sank four birdies on the trot from the 13th hole, and added another on the 18th to put Khalin under pressure.

During his stupendous run on the back nine, Madappa missed eagle-putts on the two par-5s — 14th and 18th — from inside 12 feet. His longest birdie-putt came on the 15th where he got lucky from 30 feet. In fact, Madappa could have birdied the par-3 17th hole, too, but his putt lipped out.

All this while, Khalin stayed in the lead. He fired four birdies against a lone bogey on the front nine. Coming in, he birdied the 10th to move to 13-under for the first time. His round’s second bogey, on the 12th, brought him back to under-12. A birdie on the par-5 14th, saw Khalin hold on to this one-stroke lead until he faltered on the final green.