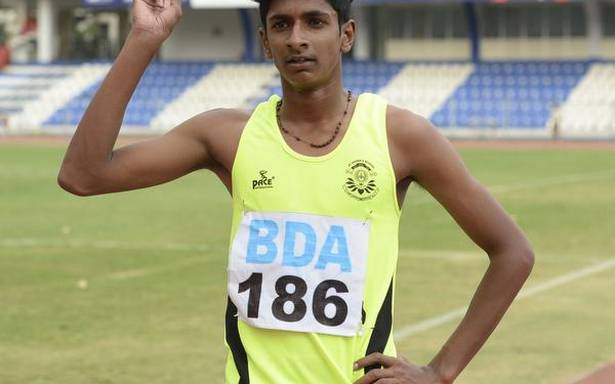 After serving a stunning series, Amoj Jacob is dreaming big

His progress in the quartermile this year has been amazing, and now Amoj Jacob believes that India has the men’s relay team to finish among the top five in next month’s Tokyo Olympics.

“For the first time, we have four runners who have gone below 46s. If we make it to Tokyo, we can finish among the top five in the 4x400m,” said the 23-year-old, the country’s fastest quartermiler this season, in a chat with The Hindu from the Patiala National camp.

“If you look at the personal bests of Muhammed Anas, Arokia Rajiv, Noah Nirmal Tom and me, all of us have gone below 46s.”

Jacob, a member of the men’s relay team at the 2019 Doha Worlds, has improved his 400m personal best with every meet this year, opening with 46s in the Indian Grand Prix-2 in late February and then improving it to 45.70 (GP-3) and 45.68s while taking the Federation Cup gold in March.

Was he surprised by his stunning run?

“No, I was not surprised, I was prepared for the timing. I thought I could run around 45.5s, but in the Federation Cup, my judgement was quite wrong. I ran the first 300 very fast, then I got tired,” he explained.

Jacob has a fantastic target now, a time that will topple the national record (45.21s) that belongs to Muhammed Anas, the 2018 Jakarta Asian Games silver medallist.

“Basically I want to run below 45s, it will be great if that happens this year. To go below 45, I’ll have to work on my start, the finish also. And also focus on the floating part, from 80 to 250m.”

With such heavy thoughts running in his head, how does Anas look at him?

“I’m the youngest of the lot and Anas is like my elder brother, he guides me with technique and everything. The rivalry is only on the track.”

“But we are mainly focusing on the relays. The qualification time in the individual 400m is quite tough.”

In the relays, which is a 16-team field, India has a confirmed spot only in the mixed 4x400m and the next few weeks will be very anxious ones as the men’s team is in the 14th spot in the Road to Tokyo rankings.