India captain Sunil Chhetri says there can't be any comparison with Messi on goal-scoring record; "People who understand football, they know." The awkwardness was palpable when Sunil Chhetri spoke, even when some 1500 miles away.

The national team captain hadn’t even left the field on Monday after scoring both goals in India’s win over Bangladesh before the comparisons with Lionel Messi surfaced again. This time, it came from the official Twitter handle of the FIFA World Cup.

“He’s now got more than Messi!” the handle exclaimed, referring to Chhetri surpassing the Argentine legend on the list of active footballers with the most international goals. So, when India’s highest goal-scorer sat down with the media on Wednesday, the elephant in the room was addressed first up.

“You have an opinion, and you have a platform (to express it). But there is no comparison whatsoever with Messi or any player in that category,” Chhetri said. “There are thousands and thousands of players better than me. People who understand football, they know it.”

The lazy comparison, which ignores so many intangibles, also trivialises the value of Chhetri’s 74 goals for the national team. For a major part of the last decade, India has repeatedly turned to the 36-year-old forward every time the team has been in trouble. Chhetri, almost unfailingly, has delivered. Be it when he scored his first goal in national colours as a 20-year-old. Or now, when he is scoring from assists by 20-year-olds like Suresh Wangjam.

“I’ve lost count the number of times I’ve walked out of the tunnel… with an unreal sense of security that he will deliver when we need it the most,” goalkeeper Gurpreet Singh Sandhu wrote on his social media handle. “He just keeps turning up over and over again.”

Just as he did with the brace on Monday, scoring in the 79th and 92nd minutes in the 2-0 win over Bangladesh. True, it was Bangladesh, which at 184 is placed 79 spots below India in FIFA rankings. And in the bigger picture, the twin strikes might not appear to be of huge significance. But the current state in which the team finds itself, the importance of the goals does not diminish.

They have brought back on track India’s flagging qualifying campaign, as far as the Asian Cup is concerned, and snapped an 11-game winless run to hand a lifeline to the under-fire coach Igor Stimac.

A World Cup spot was never in India’s sight; a spot in the 2023 Asian Cup was a more realistic target for the world’s 105th-ranked team. And on face value, the team has shown marginal improvement from the previous World Cup and Asian Cup joint qualifying tournament. With one match left to play – against Afghanistan next Tuesday – India has four more points this time compared to the 2018 cycle.

But it’s also a campaign where India have swung from one extreme – stealing a point in an away match against Asian champions Qatar – to another – dropping points against Bangladesh at home. Chhetri accepted the team has “blown hot and cold,” and rued the fact that the team could not seize the opportunities when presented, especially in the opening match 2-1 loss to Oman.

Chhetri, however, isn’t looking at results as the only parameter to judge the national team’s progress. More than winning or losing, he is keen to see how the team plays once the players get some experience under their belt. And he has advice for his teammates: “Be brave with the ball.”

The matches against Oman and Qatar, as well as the recent results against the likes of China and Thailand, have shown that the team can defend. The fitness levels, too, Chhetri added, have improved for the team to play the entire match with high intensity. “We understand defense and diet,” he said.

The next step for the national team, he added, is to show courage to keep the ball.

“Not like Barcelona, not many teams can do that. But we have to be braver on the ball, stitch together five-six passes and build from that,” Chhetri added.

He said this will change once the players start playing more matches. Right now, apart from him, only Sandhu and defender Sandesh Jhingan have been assured starters for the national team, with coach Stimac being accused of tinkering too much with the squad. 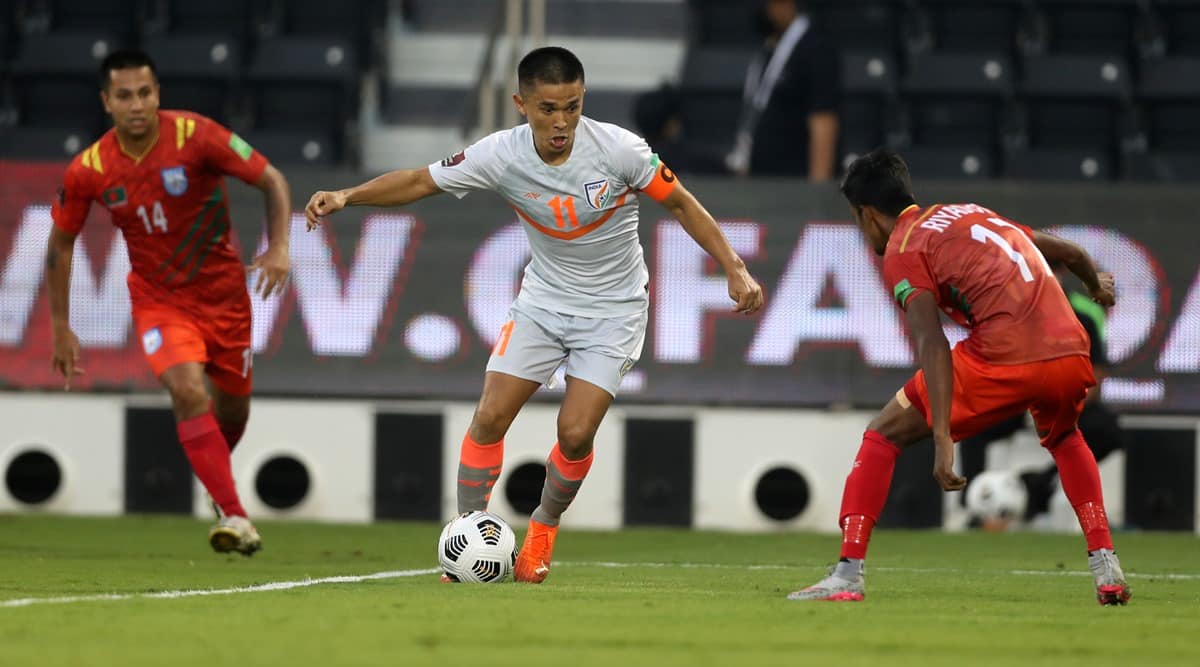 Chhetri, though, defended the Croat.

“Now no one can complain that the coach didn’t give them a fair chance,” Chhetri said. “However, it’s not that the coach doesn’t want a settled team. He’s been looking to narrow down to a group of 14 players that he will keep faith in but the situation has been tough.”

Based on the result against Afghanistan, India will know whether they will directly qualify for the third round of the Asian Cup qualifiers or will be forced to compete in a playoff match.

And while Chhetri is likely to feature again on the goal-scoring charts, leading to comparisons with Messi again, there’s another inevitable question he is routinely faced with: Who after Chhetri?

“Many people ask me that,” he said. “There will be better players… that is how evolution works. It takes time. My work is till the time I am here, I’ll give my best.”