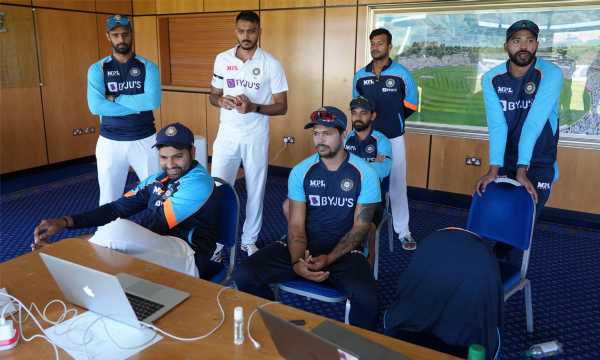 It was perhaps the first time in India’s cricketing history that two Indian teams played simultaneously in different parts of the world.

While the Shikhar Dhawan-led India took on Sri Lanka in the second One-Day International in Colombo on Tuesday, the Test squad was engaged in a warm-up game in Durham ahead of their five-Test series against England.

Captain Virat Kohli and his deputy Ajinkya Rahane were rested for the three-day match as they were not fully fit, with Rohit Sharma leading the visitors.

The Indian players in Durham were glued to the action as their compatriots registered a thrilling win in Colombo to seal the three-match ODI series 2-0.

The unlikely personality of fast bowler Deepak Chahar helped India snatch victory from the jaws of defeat with a gutsy, unbeaten, 69 off 82 balls to script a three-wicket victory over Sri Lanka

‘From dressing room, dining room and on the bus, not a moment of this memorable win was missed,’ the BCCI captioned the video on Twitter.

‘Great win by the boys. From a tough situation to pull it off was an amazing effort. Great to watch. Well done DC and Surya. Tremendous knocks under pressure,’ Kohli tweeted.

‘That was some performance by team India,’ Rohit agreed. ‘Solid grit shown right through.’