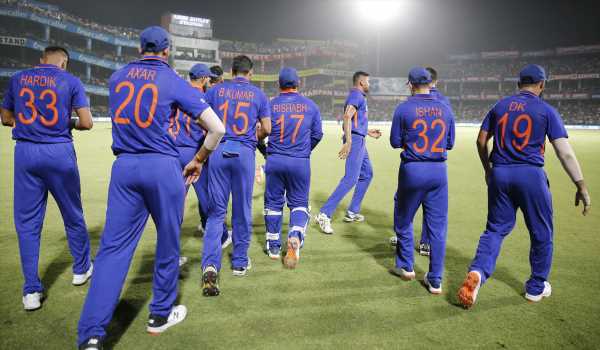 The Indian team suffered a rude shock as South Africa staged a stunning late comeback to register a thrilling seven-wicket victory in the first Twenty20 International in Delhi on Thursday.

Van der Dussen made 75 not out off 46 balls, which included five sixes. Miller’s unbeaten 64 off 31 balls also contained five sixes as South Africa pulled off their biggest successful chase in T20 cricket.

The defeat ended India’s 12-match winning streak in this format, while exposing major chinks in their bowling department.

Miller, who steered IPL Champions Gujarat Titans in a few close run chases in the IPL, continued in the same vein. He was instrumental in South Africa’s comeback along with van der Dussen, who cut loose after a shaky start. They turned the match on its head, hitting 54 from the last 19 balls.

It started with death overs specialist Harshal Patel’s third over, when van der Dussen took him to the task, hitting 22 runs off the 16th over. The medium pacer got predictable with his change of pace and length, allowing the struggling van der Dussen to break free and shift the momentum back in South Africa’s favour.

Bhuvneshwar Kumar failed to gets his yorkers right in the next over as he also went for 22 runs, with South Africa plundering 44 runs from 12 balls, which proved decisive.

The Indian bowlers seem to be bereft of ideas on what lines and lengths to bowl at the death, despite their vast experience of playing in the high-pressure IPL.

All-rounder Hardik Pandya also had an off day with the ball, as he was hit for three sixes in a single over by Dwaine Pretorius.

Yuzvendra Chahal, the highest wicket-taker in IPL 2022, was smashed for 26 runs in 2.1 overs, while left-arm spinner Axar Patel took 1/40 in four overs.

The experienced pace duo of Bhuvneshwar and Harshal went for plenty with identical figures of 1/43 in four overs, and the young Avesh Khan was hit for 35 runs from four overs.

Despite the loss, India are unlikely to tinker with their combination ahead of Sunday’s second T20 International at the Barabati stadium in Cuttack.

Captain Rishabh Pant will have to think hard and long on how best to utilise his bowlers and get the team back to winning ways. Another defeat would put South Africa in pole position for victory in the five-match series.

Do you think India should bring in India’s fastest bowler Umran Malik or Arshdeep Singh, who impressed with his disciplined bowling in IPL 2022?

Who do you think should be part of India’s playing XI for the second T20I against South Africa?

Please select your team from the list below and do post your playing XI in the message board below: