Images from Day 7 of the 2021 Wimbledon at the All England Lawn Tennis and Croquet Club, in London, on Monday.

Second seed Aryna Sabalenka battled past a determined Elena Rybakina 6-3, 4-6, 6-3 in the Wimbledon fourth round on Monday to reach the quarter-finals of a Grand Slam for the first time in her career.

Rybakina broke Sabalenka in the opening game but the Kazakh, who came into the match having won a tournament-high 96% of her service games in the first three rounds, let her opponent off immediately as she failed to hold.

Belarusian Sabalenka grew in confidence as the contest on Court Three wore on, sending down two straight aces to go up 4-2 before clinching the first set when world number 20 Rybakina double-faulted.

Sabalenka needed three sets to overcome Rybakina during her title runs at Abu Dhabi this year and Wuhan in 2019 and the Belarusian trailed 3-1 in the second set before battling back to draw level but then lost her momentum.

Having made it one set apiece with her ninth ace, Rybakina held firm until 3-3 in the deciding set before dropping serve, as Sabalenka raised her level to run away with the match. 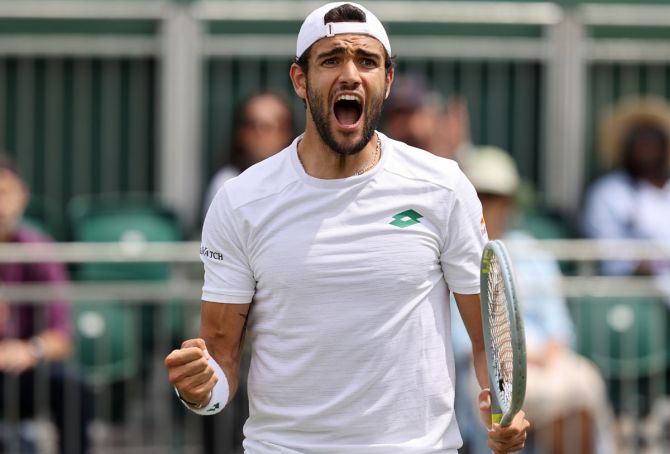 Matteo Berrettini stepped up his bid to join a select band of players to complete the Queen’s Club-Wimbledon double in the same year with a fluent 6-4, 6-3, 6-1 fourth round win over All England Club debutant Ilya Ivashka on Monday.

The roll call of players who have completed the London double includes John McEnroe, Boris Becker, Pete Sampras, Rafa Nadal and Andy Murray and, after becoming the first Italian man in 23 years to reach the Wimbledon quarter-finals, Berrettini looks confident in his attempt to join that illustrious group.

The seventh seed broke early in each of the sets and, although Ivashka produced a mini recovery to claw back from 5-1 down in the second, the result never seemed to be in doubt on a sun-soaked Court 12. Jabeur lost four games in a row from a position of strength to concede the opening set on Court Two but responded in sensational fashion to outplay last year’s French Open champion.

When Swiatek struck a majestic backhand winner down the line to take the opening set it seemed that the Pole was beginning to take charge of a match in which she started nervously.

But Jabeur started the second set like a woman on a mission, breaking to love in the opening game then holding her own serve with a trademark dropshot that had Swiatek slamming her racket into the net tape in frustration.

It was a sign of things to come as Jabeur broke serve again in the next game with a belting forehand winner at the end of a long baseline exchange.

Jabeur then saved three break points, one with an ace, to lead 4-0. Swiatek’s serve begun to look vulnerable and on set point down she rolled in a 66 mph delivery that Jabeur nonchalantly dinked over for a winning dropshot.

There was no stopping 21st seed Jabeur in the decider after a Swiatek double fault gifted her a 3-1 lead.

Serving for the match at 5-1 she showed no nerves, sealing a win with an ace and receiving a warm ovation from the crowd who thoroughly enjoyed watching her multi-dimensional game.

Jabeur, who became the first Arab woman to win a WTA title on the Birmingham grass in the build-up to Wimbledon, faces Belarusian second seed Aryna Sabalenka on Tuesday.

The Tunisian will be looking to post her best Grand Slam run, having reached the Australian Open quarter-finals in 2020.