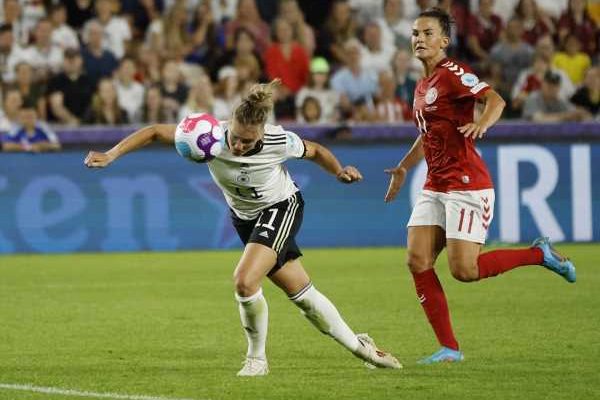 Images from the Women’s European Football Championship matches in England on Friday.

Germany’s bid to win a record ninth European Championship got off to an emphatic start as they beat Denmark 4-0 in their Group B opener on Friday.

An early strike from Lina Magull and second-half goals from Lea Schuller, Lena Lattwein and Alexandra Popp at the Brentford Community Stadium ensured Germany kept their record intact of never losing an opening match in the Euros.

It was sweet revenge for the Germans who lost 2-1 to Denmark in the quarter-finals of the previous tournament in 2017. The Danes went on to finish as runners-up that year, but could not cope with a rampant Germany this time round.

Germany rattled the woodwork three times in the opening 15 minutes but finally made the breakthrough in the 21st when Magull charged down defender Stine Pedersen and won the ball to go through on goal and rifle it past goalkeeper Lene Christiansen. Martina Voss Tecklenburg’s side could have extended their lead before halftime but were either thwarted by Christiansen or their own profligacy.

Christiansen did well to deny Magull early in the second half when she tipped wide a long-range effort from the midfielder. However, from the resulting corner Schuller rose highest to meet Magull’s cross and head in Germany’s second.

Denmark hardly threatened and conceded a third in the 78th minute when substitute Lattwein fired in a knockdown from midfielder Lena Oberdorf.

Another substitute Popp, who missed the 2017 tournament through injury, put a gloss on the scoreline late on with her 54th goal for her country, while Denmark had 19-year-old Kathrine Moller Kuhl sent off right at the end for a second booking. “We played an outstanding game. We were at it right away and created plenty of scoring chances that we didn’t really take advantage of in the first half. We were incredibly dominant and aggressive. It was a great team effort by everyone involved,” Voss Tecklenburg said.

A large contingent of the 15,746 spectators in attendance were Denmark fans who made their voices heard throughout but coach Lars Sondergaard was disappointed his side could not do the support justice.

“The support was fantastic, and the setting was insane – also after the game. What disappoints us the most is that we couldn’t perform better, and I hope we can do that in the remaining last two games in the group,” he said.

Spain come from behind to beat Finland 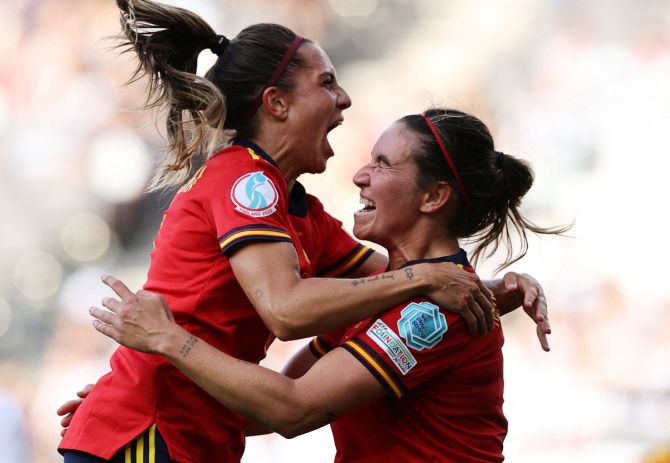 Favourites Spain made a winning start to their Women’s European Championship campaign after they came from behind to beat Finland 4-1 in Milton Keynes.

Mariona Caldentey rounded off the scoring with a penalty for Spain, who are playing without their all-time top scorer Jennifer Hermoso and Ballon d’Or winner Alexia Putellas, who were both injured before the tournament.

“They scored a goal inside the first minute of the game that nobody expected, we are not used to it,” player of the match Bonmati told a news conference.

“The good thing today is that we were able to get back in the game after the week we had been having, which has not been easy mentally. That’s how a great team is made, in such moments.

“Today we showed a little bit of who we are and what we came here for. This is a turning point and I think it will give us a lot of confidence.” 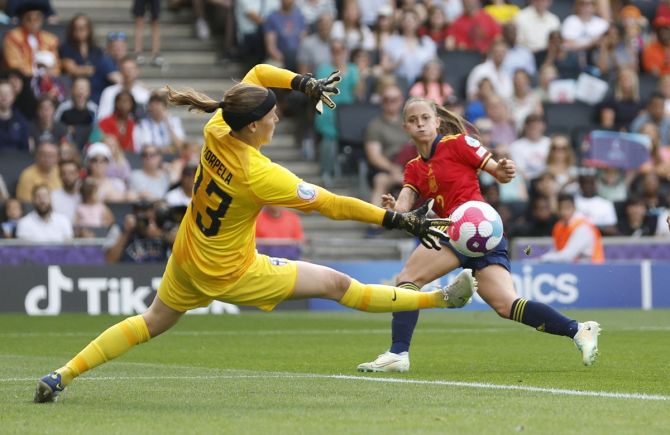 Underdogs Finland took early control of the Group B encounter when forward Sallstrom hit a low shot into the bottom left corner following a superb pass from defender Anna Westerlund.

But Spain, soon overcame the early jitters and found the equaliser in the 26th minute when the unmarked Paredes scored a towering header from Caldentey’s corner.

Jorge Vilda’s team took the lead in the 41st minute after Mapi Leon swept in a brilliant cross from the left and Bonmati headed the ball into the top corner. 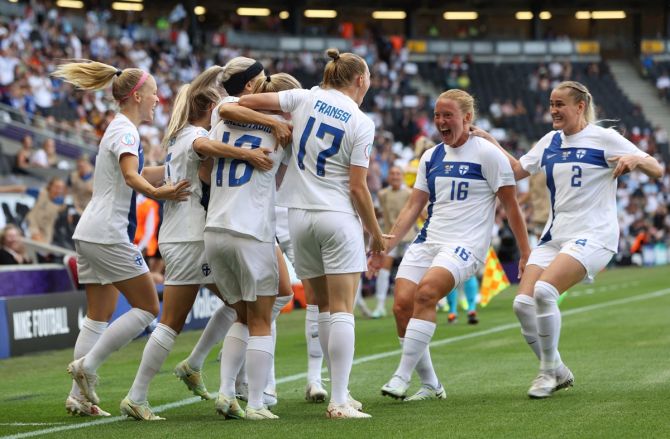 Garcia then headed in from Leon’s free kick in the 75th minute to make it 3-1 before Caldentey scored with a stoppage-time penalty.

Caldentey found the top corner from the spot in the 95th minute after Elli Pikkujamsa brought down Marta Cardona in the box.

The victory put Spain top of Group B, which also includes Denmark and Germany.

Jorge Vilda’s side will next face Germany at Brentford on Tuesday.