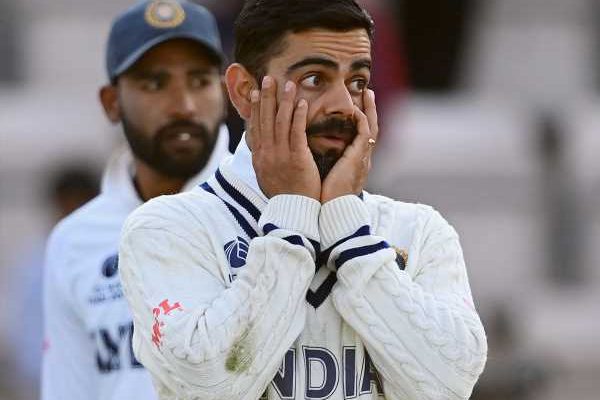 Set 139 for victory on Day 6, the reserve day, Captain Kane Williamson and veteran Ross Taylor brought all their experience into play to guide their team home for their first World title.

Williamson steered his team with an unbeaten half-century, while Taylor hit 47 after their bowlers once again destroyed the much-vaunted Indian batting.

India’s batsmen disappointed again in the second innings as they were sent packing for 170, setting the Kiwis an easy target of 139 runs.

Harish Kotian/Rediff.com looks at what went wrong for India in the WTC Final:

India started off on the wrong note in the WTC Final. They made a bold move by naming their playing XI on the eve of the match, but despite rain washing out the entire opening day and wet weather forecast to affect the remainder of the game, they stuck with the same team.

India did not field a team for the conditions, which were loaded heavily in favour of the seamers, as they included three fast bowlers and two spinners, while New Zealand went in with an all-pace attack, leaving out the spinner.

Young Kiwi pacer Kyle Jamieson ripped through the Indian batting in the first innings, taking 5 for 31 as they were dismissed for 217.

In reply, India missed the fourth pace bowler dearly as New Zealand posted 248 to take a decisive 32-run lead, despite being reduced to 192/7 at one stage.

Someone like Mohammed Siraj would have been a handful in those conditions, instead of left-arm spinner Ravindra Jadeja, who got just one wicket in the match and scored 31 runs.

Poor batting in both innings

From 146/3, India collapsed to 217 all out in the first innings. It was one of the turning points in the game.

Though Mohammed Shami brought India back in the contest with four wickets and the Kiwis’ first-innings lead was kept down to only 32, India had to bat well in the second essay.

But, again, the batsmen came a cropper against the New Zealand bowlers. On the final day, resuming on 64/2, the Indian batsmen could have applied themselves and batted for more time, but that did not happen.

The second innings effort was worse than the previous one as they slumped to 170 all out, leaving the Kiwis an easy chase of 139 runs.

It was a disappointing effort by Kohli and Co on the reserve sixth day as conditions were much better for batting.

This was the first time since 2018 that no Indian batsman scored a half-century in either innings of a Test match. Rishabh Pant attempted to hit India out of trouble in their second innings.

The left-hander played a couple of unbelievable knocks in Australia earlier this year and Indian fans were hoping for another piece of magic from the youngster.

But, alas, he let everyone down as he threw his wicket away attempting a rash shot.

Pant brought some life back in the Indian camp when he smashed Jamieson through mid-on for a four and then charged fast bowler Neil Wagner to hit him over mid-off for another boundary.

It was the same aggressive approach which resulted in his dismissal for 41. He danced down the track once again, aiming to hit Trent Boult over the leg side, but miscued it and Henry Nicholls took a good running catch on the off-side.

Pant’s wicket proved to be the turning point as New Zealand’s pacers ran through the lower order, with India losing four wickets for 14 runs in the space of 22 deliveries.

If only Pant had shown some maturity with his shot selection and batted on till tea, the outcome might have been different. When India banked on him to deliver on the biggest stage, Jasprit Bumrah failed.

With Virat Kohli opting to go in with three fast bowlers and two spinners, the onus was on the trio of pacemen to excel in conducive conditions. While Mohammed Shami and Ishant Sharma did well, Bumrah failed to live upto expectations as he went wicketless in Southampton.

He bowled 36.4 overs in the match, but went wicketless. On the sixth and final day, for a brief spell, he looked threatening and induced an edge from Ross Taylor’s bat, but the catch was spilled by Cheteshwar Pujara in the slips.

After 26 wicketless overs in the first innings, Kohli decided not to give Bumrah the new ball in the second essay and opened with Ishant and Shami.

Overall, it was a forgettable game for Bumrah who also failed to open the account with the bat in both innings.

This is only the second time that Bumrah went wicketless in a Test match.

While India’s lower order batsmen collapsed in both innings, New Zealand’s tailenders made a vital difference with the bat in their first innings.

Shami had brought India back into the contest with his four-wicket burst, but they were unable to clean up the tail.

New Zealand were reduced to 162/6 at one stage but Kyle Jamieson came in and smashed a quickfire 21 from 16 balls.

Even though Kane Williamson perished for 49, the experienced Tim Southee scored some useful runs at the end, hitting two sixes and a four in his 46-ball 30 putting on some valuable runs with Neil Wagner (0) and Trent Boult (5 not out) before he was the last man out.

The last four wickets had added 87 runs for New Zealand, while the Indian last four batsmen managed a total of 63 runs in the two innings.