India scored an emphatic 238-run victory against Sri Lanka on Monday as they bowled out the visitors for 208 in the second innings of the second Test at the M Chinnaswamy Stadium in Bengaluru.

Rohit Sharma-led team wrapped up the Test match inside three days and have swept the two-match series 2-0.

India, who were earlier at the fifth spot, are now placed fourth on the points-table with win percentage of 58.33. Australia, who are favourites to win the Karachi Test, hold the top spot, followed by Pakistan and South Africa at second and third respectively. 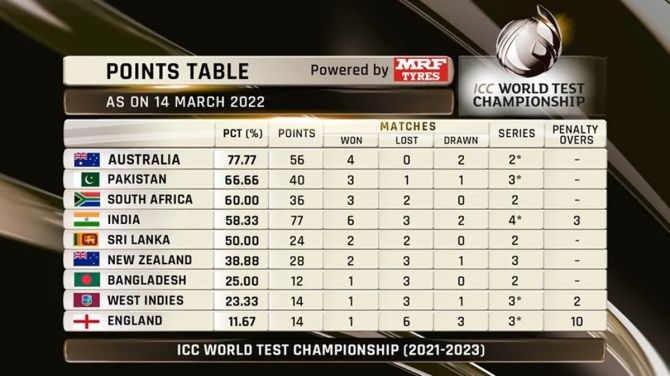 Sri Lanka, on the other hand, are below India with a win percentage of 50.

Meanwhile, West Indies have been fined 40 per cent of their match fee and docked two ICC World Test Championship (WTC) points for maintaining a slow over rate in their draw against England in the first test in Antigua, the sport’s governing body said.

They are the third team to be penalised for a slow over rate during the 2021-23 WTC cycle, with India losing three points and England losing 10 so far.